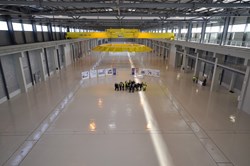 The huge PF Coils workshop won't remain empty very long. As early as this summer, the installation will be fitted out with the necessary tools and equipment in order to begin the fabrication of ITER largest coils.
Dwarfed by the giant circular spreader beam suspended over their heads, they looked like passengers in a spaceport waiting to board a ship bound for some distant planet.
No journey to Mars or to the moons of Jupiter was planned for this day, however. Under the vast ceiling of the recently completed Poloidal Field Coils Winding Facility on Tuesday 14 February, the sense of imminent departure was rather for a small ceremony involving personnel from the French construction consortium Spie Batignolles, Omega Concept and Setec; the engineering company Energhia; the European Domestic Agency Fusion for Energy; and the ITER Organization.
The winding facility, where the largest ITER coils will be assembled beginning next year, was changing hands. Having completed the building within schedule and within budget, the construction consortium was handing it over to Fusion for Energy who will now contract with the coil manufacturer.
Director of Fusion for Energy Frank Briscoe had come especially from Barcelona for the ceremony. "This building," he said in his informal address, "is the first ITER building to be completed. And for us, it will always remain the first..."

For Osamu Motojima, Director-General of the ITER Organization, the bright yellow spreader beam, with its brackets radiating like golden rays, was a potent symbol of what ITER is about—harnessing the fusion fire that burns inside the Sun and stars. 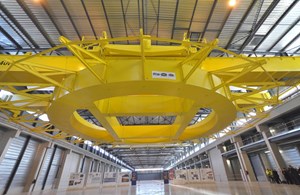 The bright yellow spreader beam, with its brackets radiating like golden rays, was a potent symbol of what ITER is about—harnessing the fusion fire that burns inside the Sun and stars.
Except for the small crowd, one table, a couple of posters, two bridge cranes and the 40-tonne spreader beam, the huge workshop was perfectly empty. One could imagine—a year or so from now—the bridge cranes slowly and silently moving along their rails to lift and manoeuvre charges of up to one hundred tons in a mechanical ballet combining exceptional size and extreme precision.

The curtain will be lifted in 2013 on this spectacular scene after the first conductor spools of niobium-titanium conductor—the raw material for the magnetic coils—are delivered to the ITER site. The delicate process of winding, impregnating with epoxy resin and assembling the giant magnetic rings of ITER should take about six years.
In the meantime, and as early as this summer, the installation will be fitted out with the necessary tools and equipment. The huge workshop won't remain empty very long ...