Lighting the fire in Padua 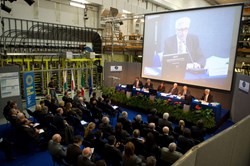 
In order to heat fuel to the 200-300 million °C temperature range required for fusion, ITER will be equipped with three powerful heating systems: 33 MW of neutral beams; 20 MW of electron cyclotron; and 20 MW of ion cyclotron. These are the systems that will "light the fusion fire."

Posing in front of the future PRIMA Neutral Beam Test Facility.
The neutral beam system represents such an advance in all its parameters over present-day systems that it was decided some years ago to build the Neutral Beam Test Facility at Padua. This facility comprises two test-stands: SPIDER, which will test full-sized ion sources, and MITICA, which is a full-scale test of the ITER heating system.


Whilst the design and some early procurement were being made, negotiations were under way for bilateral agreements between the ITER Organization and the European Domestic Energy Fusion for Energy, and between Fusion for Energy/Consorzio-RFX, Padua. These agreements were signed in December 2011 and were followed shortly by the signature of Procurement Arrangements with Japan for the high voltage power supplies and the high voltage bushing for MITICA. The Indian Domestic Agency will also be supplying components for SPIDER. 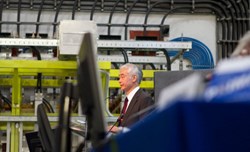 ITER Director-General Osamu Motojima during his speech at the ceremony.
Monday's ceremony was held in the experimental hall of the Consorzio-RFX fusion experiment in the presence of ITER Director-General Motojima and Fusion for Energy Director Frank Briscoe. Guests to the event included the current and former presidents of Consorzio RFX; representatives from the EU Commission; and members of regional and town governments, and university. The region is particularly proud and pleased to host the NBTF facility, which puts Padua firmly on the scientific and technical map and provides economic opportunities.


The firm in charge of building construction—Cooperativa Ravennate Interventi sul Territorio - Società ITER—will begin work on the NBTF facility in April. The "ITER" in this company's name is completely coincidental, which can only be a good omen!


While the earth has not yet moved at Padua, a fire has been lit that will contribute greatly to the success of ITER.