A specialist in large engineering projects 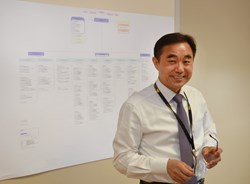 Joo Shik Bak: Chief Engineer for the ITER Project since 1 April 2012.
For a high-school student in rural Korea in the 1970s, the opportunity of attending the University of Seoul seemed an impossible dream. But Joo Shik Bak was one of the lucky ones. Determination, grades, and the encouragement of a very remarkable teacher helped to earn him admittance into the engineering program in 1975.
Some 35 years—and the construction of four enormous scientific machines—later, JS Bak was preparing to take up new duties as ITER project Chief Engineer in April.


"I'm a rather conservative man," says Bak during a February visit to ITER. "My training as an engineer has helped me in the management tasks that I faced during my career. Engineering is a school of clear decision-making that goes hand-in-hand with business matters such as cost management, schedule deadlines and performance."


Bak was in charge of the ion source and accelerator tube for Korea's first DC accelerator (the 1.5 MV Tandem Van de Graaff Accelerator, completed in 1982). From 1983 to 1990 he built a medical cyclotron and a medical microtron at the Korea Cancer Center Hospital and was in charge of operations. Over the next 10 years he oversaw the development of the 2 GeV Electron Linear Accelerator, insertion devices and beamlines at the Pohang Synchrotron Light Source. And in 2001 he took on the challenge of developing the KSTAR Tokamak's main structures (vessel, cryostat, thermal shields, magnets...), including overseeing the manufacturing of the 30 superconducting magnets and their feeders.


With the achievement of First Plasma in 2008, the KSTAR Tokamak took its place in history as the first niobium-tin (Nb3Sn) superconducting tokamak in the world.


"I have always felt a strong responsibility for nuclear fusion. I have been involved with many large fusion R&D machines; still, we do not yet have fusion energy for the public. My principal motive in joining the ITER Project is to work toward this goal for the next generation." In recognition of his role in the construction of four one-of-a-kind devices in Korea, Bak was awarded the Hyeoksin ("innovation") Medal, Order of Science and Technology Merit, by the Korean government in 2009.


At ITER, Bak will support ITER Deputy Director-General Rem Haange, head of the Project Department, by identifying and solving issues that could potentially cause delay in manufacturing. "My experience allows me to say—ahead of time—that it will be necessary to work with the heart and not only brains," warns Bak. "Attitude counts for a lot in a project like this. Each one of us should feel a huge responsibility."


He has been closely associated with the ITER Project since 2005 as a member of the Korean delegation to the ITER Science and Technology Advisory Committee. He has also filled the role of deputy Director-General and chief engineer of the Korean Domestic Agency for ITER.