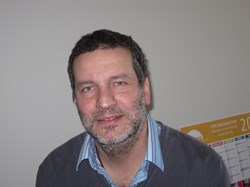 Committed to fusion: Juan Knaster, the new IFMIF/EVEDA Project Leader.
It is not that his life has been boring, but the next weeks will certainly be exceptionally exciting for Juan Knaster. The engineer from ITER's Magnet Division has been appointed Project Leader of the IFMIF/EVEDA project, which means that Juan will very soon pack his belongings into cardboard boxes and move to Rokkasho, Japan.


The International Fusion Materials Irradiation Facility (IFMIF), which is presently in the Engineering Validation and Engineering Design Activities (EVEDA) phase, is one of the three pillars of the Broader Approach Agreement between Europe and Japan. IFMIF/EVEDA is to prepare for the construction of a materials test facility for future fusion reactors. "IFMIF will test materials suitable for DEMO under a neutron fluence comparable to the one a commercial nuclear reactor will experience during the decades it will have to operate to be interesting for commercial use," the new man at the helm of IFMIF explains.


With the Broader Approach in its fifth year, the manufacture of IFMIF's prototype accelerator is going full steam ahead and the delivery of first components to Rokkasho is scheduled for early next year.


Following the report from the Broader Approach Steering Committee meeting held 24 April, the recovery of the Lithium Test Facility from the damage caused by the Great East Japan Earthquake has made big progress and is now almost complete.


Being aware that the project must be brought into line with ITER to be ready in time for the next step, the DEMO reactor, Juan knows that the schedule for delivery is tight. "I will do my best to keep the momentum that my predecessor Pascal Garin and the interim Project Leader Hiroshi Matsumoto have managed to settle." The IFMIF EVEDA phase has a major milestone in 2013. The Test Facility validation is mainly being carried out in Karlsruhe (KIT) and the Target Facility with its Lithium Loop operated by JAEA in Oarai. The Belgian Nuclear Research Center (SCK/CEN) and the Paul Scherrer Institute in Switzerland are also collaborating.


"Until 2017, the main goal for us in Rokkasho will be the successful validation of the accelerator concept with the installation, commissioning and operation of a continuous wave 125 mA and 9 MeV deuteron accelerator, the LIPAc," Juan says. The different parts of the accelerator are being developed mainly at CEA in Saclay, France, CIEMAT in Spain and INFN (Legnaro — Italy).


The deuteron injector being tested presently in Saclay, which is the first component of the accelerator from which the deuterons are injected, is scheduled to arrive in Rokkasho the beginning of 2013. "On a scientific and technological basis, it is an extremely interesting project that is calling the attention of the worldwide accelerators community," Juan says.


In a way, with his new appointment Juan will call on skills learned during the course of his career. Having started his career in fusion in the Spanish CIEMAT in 1994, where worked on the final design and installation of the Stellarator TJ-II, he then moved on to CERN where he actively participated in the design, installation and commissioning of the world's biggest accelerator, the Large Hadron Collider (LHC).


But being "a fully committed element of the fusion community," as Juan describes himself, he returned to CIEMAT when the ITER project took up speed in 2006. From Spain he was first seconded to the then existing ITER Joint Work Site in Garching, Germany, with long periods in Naka Joint Working Site before he finally moved to the provisional ITER Headquarters in France to contribute to the design of ITER's powerful toroidal field coils and their pre-compression rings in the role of Technical Responsible Officer (TRO) of both set of equipment.


And now it is again time for Juan to move on. His ever cheerful charisma cannot hide the fact that Juan is aware of the importance his appointment starting on 18 June implicates. "Both ITER and IFMIF are essential in order to tackle the construction of future fusion reactors. We need to work closely together in our common task of demonstrating that nuclear fusion is a limitless and safe source of energy for humankind and support each other in this endeavour."


For more background information on the Broader Approach click here.