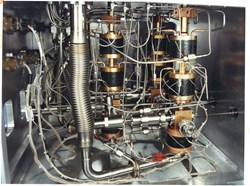 Internal image of the three-barrel repeating pneumatic deuterium pellet injector used on DIII-D for pellet ELM pacing experiments. Photo: US ITER/ORNL
Using a cryogenic deuterium pellet injector installed on the DIII-D Tokamak operated by General Atomics in San Diego, Oak Ridge National Laboratory (ORNL) researchers and collaborators were able to fire millimetre-sized frozen deuterium pellets into ultra-hot plasma at a rate of 60 times per second. The results demonstrate that pellet technology can repetitively trigger small edge instabilities that both protect material surfaces from potentially larger energy pulses and help to keep the plasma free of impurities. This is the first time the technique has been demonstrated at a level nearing the requirements of ITER.


"Our recent experiments indicate that the newly tested pellet injection technique can be applied at pellet repetition rates approaching what ITER needs and without harmful effects," said Larry Baylor, a plasma physicist and engineer at ORNL's Fusion Energy Division, who led the collaboration of researchers from General Atomics, the ITER Organization, Lawrence Livermore National Laboratory, Oak Ridge National Laboratory, and the University of California San Diego. The US Domestic Agency (US-ITER) is responsible for developing and fabricating pellet injectors and pellet-based ELM pacing technology for the ITER machine.


The team has demonstrated that it is possible to decrease the intensity of the periodic plasma edge disturbances, known as edge localized modes (ELMs), by a factor of 10 by injecting small pellets at a 10 times higher frequency than the ELMs naturally occur in the plasma, Baylor said in an interview.


"You have seen pictures of the sun, in which part of the hot plasma surface flies out and into space? That is in some sense similar to what happens to a tokamak plasma on its outer edge, its boundary," Baylor explained.


When large flare-like events occur, they can cause erosion and melting of the metal surfaces that surround the plasma, causing metal impurities of beryllium or tungsten in ITER to enter the plasma and thereby reduce its energy and performance.


"That's a byproduct of having the wall in close proximity to the plasma," Baylor said. "The magnetic field is not a perfect container. The plasma does leak out. And when it contacts the wall it can release these impurity atoms that then can find their way into the plasma. We have to minimize that."


To reduce the size of the ELMs, researchers used a cryogenic deuterium rapid-fire "machine gun" that fires 1.3 mm deuterium ice pellets into the edge of the plasma, at up to 60 Hz, or 60 times per second. Each ice pellet triggered a small ELM, short-circuiting the plasma's natural tendency to have infrequent, large ELMs. Using this rapid-fire technology, they are in effect "tickling" the edge of the plasma, Baylor explained, to turn potentially large and damaging ELMs into a series of small ones that can do little or no harm.


"It really is a machine gun. And we had three of them operating together, each one firing 20 times per second," Baylor explained. "We fired these simultaneously, alternating among them. We ended up with 60 pellets per second entering the plasma, and these stimulated much smaller ELMs than would occur naturally."


The researchers observed, as they expected, that the more frequently that ELMs occur, the smaller they tend to be and consequently the smaller the pulsed energy losses from the plasma. It benefits the plasma to create multiple small incidents and the researchers are taking advantage of this insight. "If they flare out once per second, then they are very big. But if they are ejected at 60 times per second, then they are very small," Baylor said.


Not only did the researchers successfully demonstrate that their method for controlling plasma edge activity is potentially feasible for ITER, but they also found that their intervention did not negatively affect the plasma's internal energy, Baylor said. This was somewhat unexpected. "The plasma performance was essentially the same as it was without the pellets."


Furthermore, Baylor said, they found that such pellet injection actually made the plasma cleaner: The injected pellets stimulate the flow of particles on the outer boundary of the plasma downwards along the lines of the magnetic field and towards the divertor at the bottom of the plasma vessel, where the heat flux exits the tokamak.


The divertor is a kind of funnel on the floor of the container that pumps out impurities, metal and carbon atoms and ions from the plasma. "By injecting pellets and causing particles to flow down to the divertor, [the pellets] act as a screening mechanism to keep those impurities reduced, to keep them from migrating into the plasma. So it resulted in a much cleaner plasma, more pure than would otherwise be the case. We weren't expecting this at the level that we discovered," Baylor said.


The testing of the technology at the DIII-D facility demonstrates proof of principle on a system that is about one-tenth the pellet throughput that ITER will require. While the plasma on DIII-D is sustained for a matter of seconds, the plasma in ITER will run for up to an hour.


"The scaling up to ITER represents a challenge in that we have to use larger pellets," Baylor said. "So the throughput of solid deuterium, the continuous extrusion that we create to make the pellets, is more of a challenge."


"The challenge is also in producing that much solid deuterium that is at a temperature of 15 K. ITER will not require 60 pellets per second, as we did here; it will need perhaps 20 pellets per second. But they will be much larger pellets, something more like 3 mm in size."


"It's like a BB-size, or slightly bigger, whereas the size used here in testing was only 1.3 mm, so on the order of 10 times smaller."
Moving forward, the researchers now are planning to inject pellets from the inner wall to fuel the plasma and at the same time to control edge localized plasma flares with injection from the outer wall.


"In the future in ITER, we will have to replenish the plasma [with fuel], because the duration of the plasma will be so much longer that we must replenish both the burned and slowly leaking plasma particles," Baylor said.


"Our goal is to demonstrate that we can inject fuel pellets synergistically with ELM pacing pellets and maintain good plasma performance. This is what ITER will require."