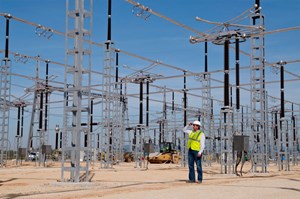 
Such incidents could cause what is known as a "phase-to-ground" fault: instead of being channelled into the transformers, the current could short-circuit with the ground and reach an intensity some one thousand times higher than its nominal value (the value consumed under normal circumstances by the ITER plant systems).
"For a very short moment until the circuit breakers operate," explains Joël, "we might have a current of more than 10 kA locally." This so-called "short-circuit current" could be damaging for the installation and dangerous for someone standing in and around the switchyard. 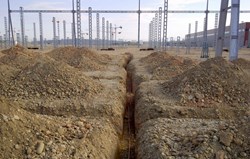 The RTE teams spent about two days performing measurements, not only on the ITER platform but also far into the nearby forest. "At a distance of 800 metres from the impact point, the earth potential, although already very feeble, was still measurable," says Joël. Measurements were also performed outside the ITER perimeter (almost two kilometres beyond the fence into the forest) in order to get a clear overall picture.
Measurements indicate that personnel operating outside the RTE switchyard will not be affected by a potential phase-to-ground fault. However, small potential differences can still induce perturbations in the control command signals of the installation's plant systems or in the electrical distribution networks.
Consequently every building on the ITER platform will be surrounded with an "earth loop" buried some 50 cm underground. Once interconnected, the loops will form a network of several tens of kilometres of copper cable—an earth mat covering the 42-hectare of the platform.