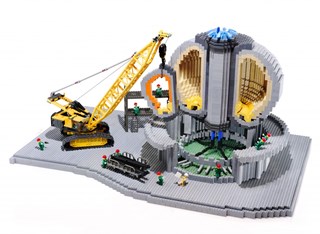 An 8,000-piece ITER mockup that is both a technical achievement and a piece of art. (Sculpture by Sachiko Akinaga; photograph by Hironobu Maeda).
Forget about tungsten, beryllium, niobium-tin and other exotic materials—the new trend in tokamak design these days is plastic.
The learned public was introduced to this new concept in the June issue of Scientific American. The US monthly's four-page article titled "Fusion's missing pieces" was illustrated with a stunning cutaway of a partially completed ITER Tokamak made of ... Lego bricks.


All parts were in place, clearly visible and perfectly rendered in spite of the limitations of the Lego bricks' sharp edges: a D-shaped toroidal field coil suspended from a crane, the central solenoid, sections of the vacuum vessel, blanket modules, the divertor, feeders ...


This 8,000-piece ITER mockup was both a technical achievement and a piece of art. It is the work of Japanese Lego bricks artist Sachiko Akinaga, who began playing with Legos at age 5 and later developed her hobby into an artistic quest. 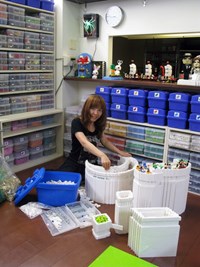 A graduate of the Toyo Institute of Art and Design in Tokyo, Sachiko was commissioned last year to create a ''logo made of Legos'' for The New York Times' winter travel issue.
"As a little girl in Tokyo," she says, "I would never tire playing with Legos. It gave me a lot of confidence and joy. I could not believe I could create objects that I had first pictured in my mind ..."


A graduate of the Toyo Institute of Art and Design in Tokyo, Sachiko has come a long way from what she considers her first work of Lego art: a box of tissues decorated with Indians dancing around a signal fire, a pond, and a crocodile that she created in 2002.


Over the years her work has evolved into a more and more sophisticated form of expression, culminating with her now-famous "Let's go to the Earth Park!"—an impressive project made with about 40,000 Lego bricks.


Last year, when the The New York Times decided to illustrate its winter travel issue with a logo made of Legos, representatives at the Lego Group led the newspaper's editors to Sachiko.


Although it included only 15,000 blocks, the Lego structure was four times larger than her "Earth Park." The artist confided to The New York Times that she worked for eleven days on the logo, including "many days nonstop, in 16-hour shifts"...


The iconic "T" logo (in gothic font) appealed to Sachiko for what she calls a "secret reason": it also stands for the word tanoshi, which means "fun" in Japanese. 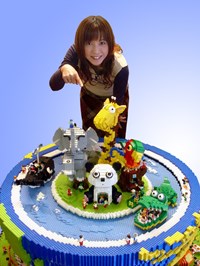 ''Legos create what is very close to a pixelated effect that the human eye and brain smooth out,'' explains the artist.
The New York Times cover caught the eye of several art directors and magazine editors in the US, among them those at Scientific American.


"Editors there gave me a cutaway view of the ITER Tokamak and a link to the ITER website. Needless to say, I knew absolutely nothing about fusion energy. Understanding the structure of a tokamak was very difficult. Basically, I used five images from the ITER web site."


As with every Lego creation, the hardest part in building the ITER model was to make the rounded shapes—and there are many in a tokamak. Overcoming this difficulty owes as much to Sachiko's technique as to inner workings of the viewer's brain. "Legos create what is very close to a pixelated effect that the human eye and brain smooth out," explains the artist. "When you look at an angled sphere made with bricks, your brain makes it appear round. I find this mental process very exciting ..."


Sachiko's rendition of the ITER Tokamak is both realistic and naïve, as a Lego construction should be. There are workers pushing a trolley loaded with pipes; others signalling to a crane operator with both hands as the delicate operation of installing a toroidal field coil is proceeding.


Of course, it won't happen exactly this way during the assembly of the machine. Like all artists, Lego artists are entitled to some poetic license.