See you in September! 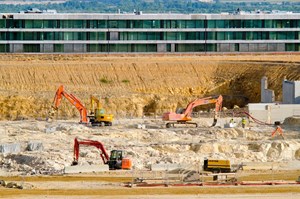 In less than one year, the landscape on the platform has undergone spectacular changes. Here, the ongoing works on the Assembly Hall foundations are seen against the backdrop of the nearly completed Headquarters Building.
A year ago, when Newsline closed for the summer recess, the Tokamak Complex Seismic Isolation Pit was being readied for lower basemat concrete pouring, and cladding and roofing operations were far from finished on the Poloidal Field Coils Winding Facility.


Twelve months later, the landscape on the ITER platform has undergone spectacular changes. In the Tokamak Seismic Pit, the 493 plinths and seismic pads of the Seismic Isolation System are now in place, the backfilling between the retaining walls and the rock is almost complete, and the pouring of the next basemat—the Tokamak Complex basemat—should begin in October.


Located adjacent to the Tokamak Seismic Pit, the Assembly Hall area is the site of the latest construction campaign on the platform.


There, foundation work is ongoing to prepare for the construction of a 5,400 square metre area that will support the vast antechamber to the Tokamak Building where the machine components will be assembled. Pouring of blinding concrete and reinforcement works will begin in August, followed by concrete pouring activities that will extend into March 2013.


The Poloidal Field Coils Winding Facility is being prepared for the installation of the coil manufacturer's tooling. For six years, beginning 2013, the Facility will house the successive winding and assembly of ITER's poloidal field coils, the huge, circular coils that will be positioned horizontally around the toroidal field magnet system.


A giant plumbing operation—the laying of 1.6 km of concrete piping—began in March and will be completed in November. The deep underground drainage network under construction will collect rainwater from the platform buildings, roads and trenches, and evacuate the overflow of a "centennial rain," the extreme rainfall that, statistically, occurs only once every century.


Last but not least, the ITER Headquarters Building. For some 500 ITER staff and contractors, Moving Day(s) are scheduled to begin in the second half of September.


By then Newsline will be back to report—as it's been doing for the past five and a half years—on the news, large and small, of the ITER Project.
Click here to view the video "Iter Worksite, Fusion for Energy Progress, June 2012"