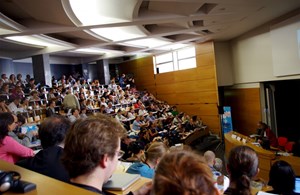 The discussions at the conference in Nancy confirmed that science communication is also experiencing many profound changes due, among other factors, to the development of electronic communication and social networks.
With 650 participants from 57 countries meeting last week in Nancy (France) for a conference on science communication, there is no doubt that this field of activity is rapidly expanding. Some argue that science communication has even become a new academic discipline with its own peer-reviewed journals, hundreds of PhD students, and dedicated events. For sure, it is a growing professional sector as most research organizations have established a public relations or press office.


Personally speaking, I don't believe science communication is (yet) a scientific discipline. I haven't seen any model able to predict or even describe the current situation and results. There are many prejudices and misconceptions circulating in this area, even within the scientific community. For example, communication specialists Matthew C. Nisbet and Dietram A. Scheufele have shown that much of what researchers believe about public and effective communication is wrong (The Scientist, 23 July 2012).


In my public lecture, I insisted on the concept of "mediascience," which is science as it appears in the media and which is therefore the public face of science. Mediascience is very different from science itself, nevertheless—although often criticized by the scientists—it is useful in that it allows scientific research to be contextualized and to reach the political sphere. I also identified three "ages" of science communication: information, communication (dialogue) and public participation in decisions about science and technology. In my opinion, we are still, to a large extent, in the first age.


The discussions in Nancy confirmed that science communication is also experiencing many profound changes due, among other factors, to the development of electronic communication and social networks. Expectations are still very high, which explains why all countries have undertaken, with some success, activities in science communication to promote public engagement on collective challenges.


However, there are major concerns about these activities as they are not often valued and recognized at the political level, or in the evaluation of scientific careers. Also, some recent scientific advances have not attracted the attention of the media and the public. Citizens feel « left aside » because they believe that scientific research and its applications are discussed and decided without involving them. Scientists, on the other hand, have the impression that they are increasingly ignored.

As French Minister of Research and New Technologies (2002-2004) and later of European Affairs (2004-2005), Claudie Haigneré was deeply involved in the ITER Project. She visited what was then the proposed ITER site in 2003—here with physicist Jean Jacquinot (centre) and then French High Commissioner to Atomic Energy Bernard Bigot (left), and again in 2006 after the site was selected.
With Claudie Haigneré, a former French Research Minister, European "spationaut" (Russian Orbital Station MIR in 1996 and International Space Station in 2001) and currently President of Universcience, and Bernard Schiele, a Canadian professor who is widely acknowledged as one of the best experts in the world on these questions, I presented the "Nancy Declaration" to the press to publicly stress the importance of these activities and the need to support them at all levels. The Declaration called on "research stakeholders and decision makers to strengthen the links between science, technology and society, and value the role of citizens in science. Citizens are key actors in research and innovation because the distinction between scientists and citizens is no longer relevant, as they all contribute to society decisions."


This statement was echoed in Cadarache a few days ago by a French journalist, Sylvestre Huet, who writes for the newspaper Libération and the science blog {Science au carré}. In a presentation he gave at CEA Cadarache entitled "Information and nuclear: mission impossible?" he showed that the impression prevails that there is still a big gap between some political decisions and public concerns.


After a provocative statement that sharing scientific knowledge is an illusion (he meant advanced and complex scientific works), he highlighted many wrong ideas concerning nuclear science that are circulating among the public in the public sphere. The problem is not a question of information or communication but of trust in the public authorities and stakeholders. "This is not a specific problem relating to the nuclear industry," Huet added, "but we have seen, even last week, politicians taking a decision without waiting for the analysis of the competent experts. This undermines the credibility of scientists."


This is a strong reminder of the importance of transparency and openness in science communication, which is a key principle of our ITER public communication strategy.