Share Tweet
Designing components with remote handling in mind
The neutral beam remote handling system, whose conceptual design was reviewed in July.
With the exception of the European JET and the American TFTR which both, at one point, used the "actual fusion fuels" deuterium and tritium (DT), remote handling was never central to tokamak design. 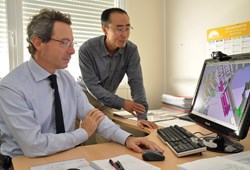