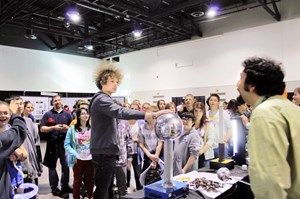 Arturo Dominguez, a postdoctoral fellow in PPPL's Science Education department, and a group of students watch a student's hair stand on end in a static electricity demonstration. © Princeton Plasma Physics Laboratory
The latest advances in plasma physics were the focus of more than 1,000 scientists from around the world who gathered in Providence, R.I., from 29 October-2 November for the 54th Annual Meeting of the American Physical Society's Division of Plasma Physics (APS-DPP). Papers, posters and presentations ranged from fusion plasma discoveries applicable to ITER to research on 3D magnetic fields and antimatter. In all, more than 1,800 papers were discussed during the week-long event.


Researchers from the U.S. Department of Energy's Princeton Plasma Physics Laboratory (PPPL) reported on experiments and computer simulations related to tokamak confinement and a variety of other research interests. These included specialized areas such as laboratory and astrophysical plasmas, where PPPL physicist Hantao Ji was prominent as a topic chair and speaker at a tutorial session.


The Laboratory sent 135 physicists, science educators and graduate students to the meeting and saw some of its research highlighted in news releases on the APS-DPP website. Of the 15 papers highlighted in this manner, seven came from PPPL.


The meeting focused considerable attention on boundary physics and plasma-material wall interactions, an area of growing emphasis at PPPL. Dennis Whyte, a professor of nuclear science and engineering at the Massachusetts Institute of Technology, presented a major review of the subject to a plenary session. Invited speakers on the topic of plasma-wall and impurity physics included PPPL scientists Filippo Scotti and Dick Majeski, principal investigator for the Laboratory's Lithium Tokamak Experiment (LTX).


PPPL physicists Michael Jaworski and Igor Kaganovich participated in a session on plasma-wall interactions, with Jaworski serving as chair and Kaganovich giving the first invited talk in the session.


The importance of boundary physics has been recognized in innovations like the so-called snowflake divertor, which limits the heat on tokamaks' inner walls. The divertor, developed by researchers at PPPL and the DOE's Lawrence Livermore and Oak Ridge national laboratories, won an R&D 100 Award in June from R&D Magazine.


The device "reduces both the power flux on plasma-facing components and the influx of impurities into the core plasma," said PPPL physicist Robert Kaita, the head of diagnostics and physics operations for the National Spherical Torus Experiment Upgrade (NSTX-U), and co-principal investigator for the LTX.


Considerable interest also was shown for inertial confinement fusion experiments at the National Ignition Facility (NIF) at the DOE's Lawrence Livermore National Laboratory. Speakers noted that producing fusion by heating a capsule producing energy with high-powered lasers was proving more difficult than expected. NIF scientists now seek to develop a more detailed understanding of the physics of this process in order to achieve ignition.