Share Tweet
Dealing with space constraints in ITER's Data Centre
Every day ITER accumulates megabyte upon megabyte of data that must be safely stored, organized and made accessible to thousands of users.


As a consequence, ITER needs the equivalent of a very powerful computer equipped with a very large and fast hard disk.
Early last week the barebones of this computer were delivered to the Headquarters building, consisting of 25 tonnes (nine truckloads!) of racks, cooling units, power distribution modules and batteries that will host the hundreds of disks and processing units of the ITER Data Centre. 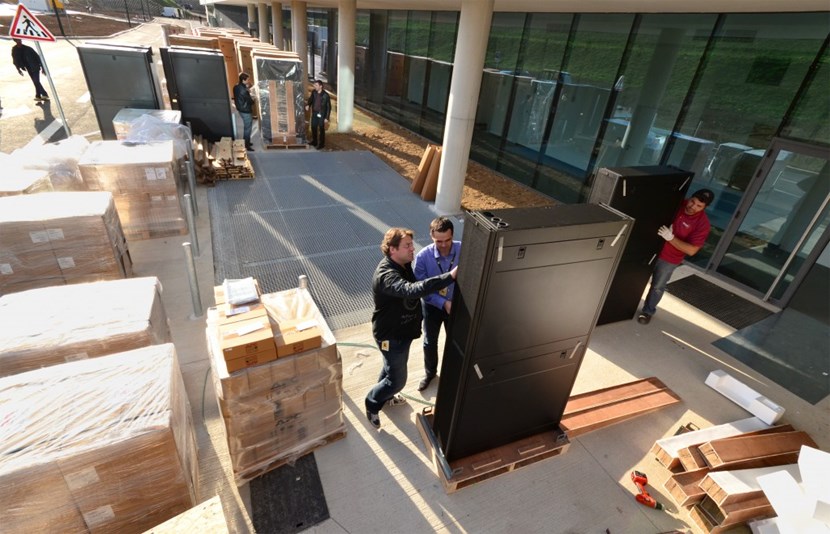 Early last week, Cédric Chaumette from IT and Section Leader for ITER's Steady State Electrical Network Joël Hourtoule took delivery of 25 tonnes of equipment destined to the new ITER Data Centre. The previous installation, in what is now building B81 (the ''old'' ITER Headquarters building), will serve as a secondary Data Centre hosting critical backup services.
Because of space and budget constraints a lot of technical creativity had to go into the design of this new Data Centre. "An early plan was to have an 800-square-metre room, later reduced to 300, and to equip it with EUR 3.5 million worth of hardware," explains IT System Administration Expert Cédric Chaumette who managed the project.


Two years after the original plans were drafted, the Data Centre's surface has shrunk to 120 square metres and its budget to EUR 1 million. However, even within these reduced parameters, IT managed to design a more efficient, "greener" and scalable installation that will serve ITER for the whole duration of its construction life cycle.


How did they do it? Implementing a standard architecture—characterized by low-density racks and in-room cooling—was impossible. "The space constraint was very high. There was no way we could evacuate the heat generated by the 300 KW of IT power the installation requires. Rack cooling was a major problem."


Racks must be cooled because, beyond a certain temperature, processors and hard disks are at risk. In the case of standard architecture, cooling is achieved by circulating cool air from below a raised floor and dissipating it throughout the room. This only works, however, when the available space permits a low rack density—not the case for ITER's 120-square metre Data Centre.


The solution Cédric and IT came up with is an innovative design called "hot aisle containment," where cooling devices are interspaced with computer racks ("in-row cooling") and cool air is forced throughout the whole height of the racks. In this new medium-to-high rack density arrangement, the cost is divided by three and the storage and processing capacity becomes scalable to the ever-growing needs of ITER.


The new ITER Data Centre is scheduled to be operational in March 2013.


Click here to view an animation of the ITER Data Centre floor plan.