The art of fixing things

Share Tweet
The art of fixing things
Task Force members on CAD and related processes discuss the recommendations that should be pursued and those who shouldn't — and why.
Every human organization, whether family circle or megacorporation, needs people who can identify potential hurdles and work around them. At ITER, one of these "fixer" roles is held by Colette Ricketts and the other three members of the System Management Section she heads.


Colette, who wrote her PhD thesis on "Solid-state small particle magnetic systems," could have pursued a career in pure physics. However after working for a couple of years designing and maintaining laser interferometer systems for the JET and COMPASS tokamaks at UKAEA, she realized that she had an ability to sense why things sometimes take a wrong twist, and a natural skill for getting them fixed.


As she progressively moved from science and technology to the management and control of large UKAEA projects, organizational performance became her "core competence." Colette's reputation as a "fixer" was established.


After 18 years at UKAEA-Culham, she joined the ITER Project Office in 2011 and, as the Division was reorganized in early 2012, came up with a proposal for an improvement program modelled on what she had done at UKAEA. 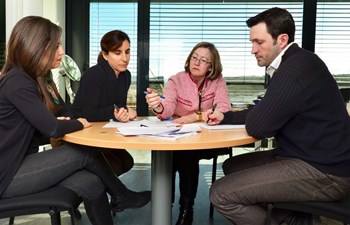 The System Management Section: left to right, Angela Saenz, Nathalie Zeltner, Colette Ricketts and Colin O'Sullivan.
At a time when ITER was facing multiple challenges, it was essential to improve the project's performance and efficiency. "I followed my usual sequence," Colette explains, "first working with senior managers to define what we were trying to achieve, then interviewing people at all levels of the Organization to identify and analyze the barriers that stand on the way to success."


In business parlance, this is called "root cause analysis." Basically it is attempting to identify what can be wrong in the way work is organized.


The initiative, which the ITER Director-General officially presented during an all-staff meeting on 23 January 2012 in Manosque, was given the catchy name "Improve(IT)².'' It called on staff members to continuously ask themselves whether they could streamline the way they perform their task: in Deputy Director-General Rich Hawryluk's words, "constantly looking for opportunities to simplify our procedures and practices."


Relying on Colette's System Management Section proactiveness as much as it does on the voluntary contributions of the ITER staff and collaborators, Improve(IT)² is both an attitude and a set of services that aim at providing near-term benefit while addressing the obstacles to success.


Each service emphasizes the need to respect colleagues and work together to find common solutions. "And there are always a million different ways to fix a problem," Colette assures.


Improve(IT)² services adapt and grow according to the needs of the workforce. Currently, they include an on-line Learning Centre, an Ideas Network and a Task Force process.

Accessible through the ITER Intranet, the On-line learning centre's purpose is to collect in one place key information to help Unique ITER Team members (ITER Organization and Domestic Agency staff and contractors) to do their jobs more easily.
The Learning Centre is a web-based platform where the ITER Organization, the seven Domestic Agencies, and contractors can share their experience and learn from each other by posting videos with key information.


The Task Force process responds to input from the workforce and provides a method for constructively engaging ITER Organization and Domestic Agency personnel to solve common issues: improving the search tool in ITER's document management system IDM is one example of what an improvement task force can achieve.


The IDM built-in search system was complex, time-consuming and frustrating. What everyone aspired to was the simplicity and efficiency of a Google-like search engine. "All I was hearing was: sorry but it cannot be done! Well, we established a task force to tackle this issue and IT found a solution. The Google search engine is now available ..."


As for the Ideas Network, accessible through the ITER Intranet, it provides a mechanism for process owners (the people who develop the rules and tools) to obtain the benefit of user feedback. "The Network takes your suggestion or complaint and delivers it to the person who is in a position to address it. This is a very efficient system for people who have identified an issue but have no idea about who could solve it ..."


Several things are at stake in the Improve(IT)² approach: one, says Colette, is to deliver near-term benefits for the staff and for the Organization that will in turn encourage team behaviour; another is containing the cost of the project. "The network has been running since June and we've been getting an average of 15 ideas per month. The accepted suggestions are generating an estimated EUR 700,000 per year in productivity gains."