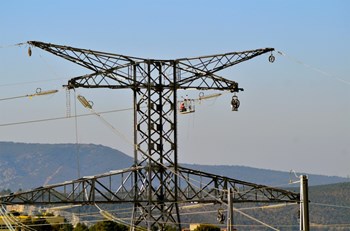 As ''compensation'' for the implantation, within city limits, of the 400kV power line that feeds the ITER switchyard, the village of Saint-Paul-lez-Durance received a EUR 900,000 check from French electricity carrier RTE. Mayor Pizot decided to split it with neighbouring Vinon-sur-Verdon.
ITER's economic impact on neighbouring villages was felt with a certain intensity, on Wednesday 23 January, as representatives from France's electricity carrier RTE presented Mayor Roger Pizot of Saint-Paul-lez-Durance with a EUR 900,000 check.


The money was intended as "compensation" for the implantation, within city limits, of the 400kV power line that feeds the ITER switchyard. As required by French law, the compensation must represent 10 percent of the cost of the power line works (EUR 9 million)—quite a sum for a village whose annual budget does not exceed EUR 5 million.


However Mayor Pizot considered that, as neighbouring Vinon-sur-Verdon had also been impacted by the power line (at least visually), it was only fair to split the sum with his colleague Claude Cheilan, the Mayor of Vinon.

In both villages, the money was soundly invested. In Saint-Paul (pop. 992), the village council decided to modernize the village's street lighting in order to reduce the municipality's electricity bill, renew the equipment of Saint-Paul's public park, and also attribute EUR 50,000 to the local association that is in the process of renovating the 16th century pigeon tower located near the Château de Cadarache. The village of Vinon (pop. 4,100) will use the compensation money to create a much-needed pedestrian and bicycle passageway that will run along the present bridge over the Verdon River.


The official ceremony held last week in Saint-Paul's town hall was also the occasion for the sous-préfet of Aix-en-Provence, representing the French government, to insist on the importance of the ITER-induced economic benefits for the region. "Since the beginning of works on the ITER site," Yves Lucchesi reminded the audience, "more than EUR 620 million in contracts have been attributed to companies based in the Provence-Alpes-Côte d'Azur region."