"We now have the opportunity to tackle our biggest challenges"

''We haven't progressed as rapidly as we foresaw 40 years ago,'' says veteran fusion scientist Hutch Neilson, ''partly because the technical challenges have proved to be greater than we estimated and partly because for many years the resources were not available to take the large steps needed to accelerate progress. Now, though, with large international commitment to the ITER Project, we have the opportunity to tackle some of our biggest challenges. Our community needs to deliver on ITER's promise as rapidly as possible, and thereby make the case for continued support for solving fusion's remaining challenges. I am confident that we will do that.''
On 10-14 June in San Francisco, the international Symposium on Fusion Engineering (SOFE) will convene for its 25th edition.
We asked the chair of the Symposium's technical program committee, Hutch Neilson, to share his observations in advance of the event on the challenges that today's fusion engineers must confront and, more generally, on the present state of fusion development.
George H. "Hutch" Neilson heads the Advanced Projects Department at the U.S. Department of Energy's (DOE) Princeton Plasma Physics Laboratory (PPPL), where his responsibilities include advanced design and planning for future fusion initiatives. Neilson manages collaborations with stellarator projects in Germany and Japan, and is the US leader in developing collaborations with South Korea and China on the design of next-step fusion nuclear facilities.
During the past year, Neilson has played a leading role in promoting international collaboration on the development of fusion technology programs directed toward a magnetic fusion DEMO, and he has been instrumental in launching a new DEMO program workshop series under the auspices of the International Atomic Energy Agency.
At PPPL, which he joined in 1989, he has led national physics design activities for a series of fusion experiment projects, including the Korea Superconducting Tokamak Advanced Research (KSTAR) and PPPL's National Compact Stellarator Experiment (NCSX) project, which he oversaw from its inception in 1998 through fabrication of its major components.
A MIT graduate, Neilson is a fifty-year fusion veteran who joined Oak Ridge National Laboratory in 1974. 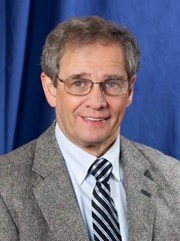 ''Fusion can take credit for a long list of accomplishments in [the past 40 years], but I would single out the start of ITER construction as a sort of crowning achievement,'' says PPPL Hutch Neilson.
Newsline: Worldwide conferences on fusion are many. What is SOFE's specificity?


Hutch Neilson: SOFE's focus is fusion engineering. Fusion engineers have the crucial task of producing the components and systems needed to advance fusion physics and technology. Progress toward fusion energy systems, both magnetic and inertial, can be measured by the advances in the degree of system integration in fusion research facilities. Today's fusion engineers confront the challenges of large, industrial scale facilities such as the National Ignition Facility (NIF) and ITER. They use advanced technology to obtain self-consistent solutions to demanding physics requirements, integrating large numbers of components on an unprecedented scale. SOFE attracts leaders from the international fusion research community, providing a venue for a multilateral exchange of information among physicists, technologists, and engineers.  The first symposium, held in 1965 in Livermore, CA, was called "Symposium on Engineering Problems of Controlled Thermonuclear Research." Years ago the name was simplified to "Symposium on Fusion Engineering" and today the series coverage has expanded to include such topics as project management and system integration. But, the focus is still very much on fusion's challenging engineering problems and their solutions.


What will be the highlights of this year's 25th edition?


The completion of NIF and ITER's transition fromdesign to construction mark a transition to a new phase of the world fusion enterprise, in which the focus is increasingly on the final steps to fusion's energy goals. SOFE-2013 will advance the international technical discussion concerning the engineering of current projects including NIF and ITER, but also of next-step programs and facilities on the roadmap to the realization of fusion. Participants will have the opportunity to tour the National Ignition Facility. The symposium will feature plenary talks from China, South Korea, and the European Union, discussing ambitious plans, including new fusion nuclear facilities, aimed at fusion electricity generation by mid-century. ITER will be prominently featured in several of the fifty or so invited papers, as well as in plenary talks by the 2011 Fusion Technology awardee and ITER Deputy Director-General Remmelt Haange and by Deputy Director-General Carlos Alejaldre. Invited papers from several operating tokamaks and stellarators will emphasize their accomplishments and plans in support of fusion next steps.


The 2011 SOFE, in Chicago, called for "bolder steps forward" in the realization of commercial fusion energy. In your opinion, have these steps been taken?


Yes, much has happened in this regard since SOFE-2011. For a few examples, the European Fusion Development Agreement has rolled out a roadmap calling for a demonstration fusion power plant to start operation in the early 2040s with the goal of demonstrating net electricity by 2050. China and South Korea are both studying design options for next-step fusion nuclear devices, and are making plans to start construction in the 2020s. And, the International Atomic Energy Agency (IAEA) has launched an annual DEMO Programme Workshop series to foster international collaboration and broaden the international technical discussion on DEMO technical issues. The first of these workshops was held at UCLA in October 2012. 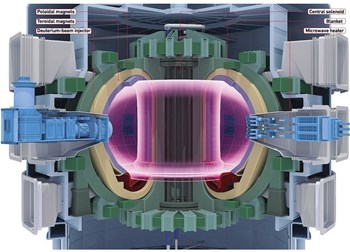 Much has happened since SOFE-2011: EFDA has rolled out a roadmap calling for a demonstration fusion power plant to start operation in the early 2040s; China and South Korea are both studying design options for next-step fusion nuclear devices, and are making plans to start construction in the 2020s.
How do you see the DEMO projects developing? And what is the best way, as your wrote in a Newsline column in September 2011, "to tackle the remaining science and technological challenges on the way to a magnetic fusion DEMO"?


Establishing roadmaps and starting to design DEMO facilities, as some countries have done, is a good start. The next step is to carry out the critical DEMO-focused R&D programs needed to establish the technical basis for these projects. Heat exhaust, materials properties under fusion neutron irradiation, and tritium self-sufficiency are among the technical challenges for which R&D is needed to develop practical solutions. Most importantly, all agree that successful construction and exploitation of ITER is mandatory, not only to understand the properties and control of a burning plasma, but to establish fusion's ability to successfully carry out such a large-scale project. International collaboration was crucial in establishing the ITER Project and, in my view, will continue to be indispensable for successfully completing the ITER mission and the remaining steps to DEMO. Going forward, we will continue to experiment to find the best among the many possible models for international collaboration.


You've had a long career in fusion research. How do you assess the progress accomplished over the past 40 years or so?


I have a mixed response to that question. Fusion can take credit for a long list of accomplishments in that period, but I would single out the start of ITER construction as a sort of crowning achievement. Before we could take that step, we had to establish ITER's technical basis (both physics and technology), organize an international enterprise, develop a self-consistent design and schedule, and initiate work through Procurement Arrangements and, finally, contracts. Those accumulated accomplishments have taken fusion across the threshold to a new DEMO-focused era, in which succeeding with ITER will be our first task. But, I have to say that we haven't progressed as rapidly as we foresaw 40 years ago, partly because the technical challenges have proved to be greater than we estimated and partly because for many years the resources were not available to take the large steps needed to accelerate progress. Now, though, with large international commitment to the ITER Project, we have the opportunity to tackle some of our biggest challenges. Our community needs to deliver on ITER's promise as rapidly as possible, and thereby make the case for continued support for solving fusion's remaining challenges. I am confident that we will do that.


Harnessing fusion energy and providing mankind with an almost inexhaustible and universally available energy source could change the course of civilization. Do you find that policy makers and public opinion are sufficiently aware of what is at stake in fusion research?


Broadly speaking, yes. I think fusion's potential is broadly understood by the public and policy makers, but there is also a generally correct appreciation of the uncertainties, risks, and costs attendant with fusion research. Support for fusion research competes with other public imperatives. Fusion's priority is not always as high as we fusion researchers might wish, but the sustained support we've had over several decades and now, the commitment to ITER, indicates that its importance is broadly understood and the glass is at least half full. That said, there are plenty of misconceptions out there, and it behoves fusion researchers to be relentless in their efforts to constantly explain, educate, and deliver a balanced message about fusion's potential to the public.