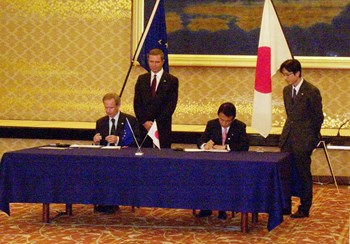 On 5 February 2005 in Tokyo, Mr Taro Aso, Minister for Foreign Affairs of Japan, and Mr Hugh Richardson, the Ambassador of the Delegation of the European Commission to Japan, signed the Agreement for the Joint Implementation of the Broader Approach Activities in the Field of Fusion Energy Research.
The term "broader approach" appeared for the first time in an official document in December 2003, following a ministerial meeting of the six ITER Members held in Washington, DC (India would join two years later).


Although the ministers had reached "a strong consensus on a number of points," they had been unable to decide on where ITER would be built. Rokkasho, in northern Japan, and Cadarache, in southern France, were both "excellent sites for ITER," read the joint communiqué, "so excellent, in fact, that [the ministers needed] further evaluation before making [their] decisions based on consensus."


As a consequence, the ministers asked the ITER Team, in conjunction with the ITER Members —then referred to as Parties—"to conduct a rapid exploration of the advantages of a broader project approach to fusion power."


What a "broader approach" meant, at this stage, was still vague. However, over the following years the concept would be refined; by the end of 2006 the "Broader Approach" (this time with capital letters) was defined to be a privileged and equal partnership between the European Union and Japan to complement the ITER project and to carry out R&D and advanced technology development for the next-step device—the future demonstration fusion power reactor DEMO.


On 5 February 2005, the ten-year Agreement for the Joint Implementation of the Broader Approach Activities in the Field of Fusion Energy Research was signed in Tokyo. It comprised three projects, all based in Japan, in support of ITER and in preparation of DEMO:  the engineering validation and engineering design for the future International Fusion Materials Irradiation Facility (IFMIF/EVEDA); the International Fusion Energy Research Centre (IFERC) housing a DEMO Design and R&D Coordination Centre, a major computational Simulation Centre, and an ITER Remote Experimentation Centre; and the Satellite Tokamak Programme, which involved the upgrade of the Japanese JT-60 tokamak to JT-60SA, equipped with advanced superconducting magnets.


Six years into existence, the Broader Approach has borne many fruits. The three projects are all well under way, with the beginning of JT-60SA assembly this month, the start of operation of the supercomputer Helios in January last year and progress on the IFMIF prototype components that, despite some damage due to the 11 March 2011 earthquake, are either in the course of fabrication or already operational.


This week in Newsline, we present the latest news on two of the Broader Approach projects, the Satellite Tomakak program and IFMIF/EVEDA.
R.A.