A 3,500 m² extension for Headquarters 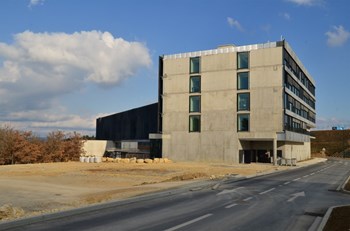 
The original architectural design of the building called for office space for 460, with two options for extension (for an additional 250 desk spaces per option). As early as June 2008, the ITER Organization reported to the Second ITER Council that at least one of the two options would be required: projections for the Construction and Operation Phases of ITER placed manpower requirements at between 1,000 and 1,100 desk spaces.


"Despite the rationalization of the building's internal layout, which increased its capacity to 500, and another 300 existing desks in the former Headquarters building, the insufficiency of available space for the long-term needs of the project was evident," explains head of Building & Site Infrastructure Tim Watson.

The new extension will be architecturally compatible with the main building—five-stories, the same height and width, and the signature vertical slats on the public facade.
As construction began on the 20,500 square-metre Headquarters, BSI conducted a study of the potential options for additional desk space. One consideration prevailed: in the interest of efficiency, any new office space should be as close as possible to the Headquarters building. Could pre-fabricated buildings be a solution? Or would a permanent extension be more cost efficient in the long run?

"It turned out that all indicators pointed to a permanent extension as the most rational and cost-efficient solution," says Tim. "Pre-fabricated buildings have higher operational and maintenance costs, and in the longer term they have to be replaced. By adding onto the Headquarters building we will be able to capitalize on existing infrastructure such as lifts and some of the heating and cooling system capacity. We'll also save time by not having to submit a new building permit and by working with the architect and building designers that just completed the ITER Headquarters."


The proposition of a permanent extension to the Headquarters Building was submitted to the ITER Council in June 2012 and endorsed. 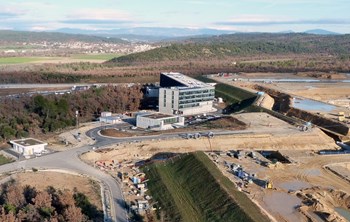 The 35-metre extension will bring the Headquarters building into alignment with the far end of the medical building. © Sylvain Couturier
The new extension will be architecturally compatible with the main building—five-stories, the same height and width, and the signature vertical slats on the public facade. Walking along an interior corridor, it won't be evident where the "old" building ends and the new begins. The building will be equipped with the usual services, meeting rooms and offices for two to four, and also a large proportion of "open space" offices hosting up to 24 people. One unique feature will occupy an inner room on the ground floor: a 3D virtual reality room that will be used for design and engineering activities.


Since January 2012, BSI has worked closely with the architect and building designers to establish the technical specifications for the extension. Preliminary specifications were distributed through the ITER Domestic Agencies to inform potentially interested construction firms of the upcoming tender to be issued by the ITER Organization. This phase has now ended and the tender offer is on the point of being launched.


For ITER staff, extension works should become a daily reality beginning this summer. Following the award of the extension construction contract, BSI estimates that 12 months will be necessary for building works—an "aggressive but achievable" schedule.


Thanks to Erwan Duval, Facility Management Officer, for his contribution to this article.