Share Tweet
Team work celebrated at last Conductor Meeting
Arnaud Devred calls this collection of strands, produced by different manufacturers using different techniques, the ''TF strand zoo.'' To match the needs of ITER's toroidal field coils, the world production capacity of Nb3Sn strand had to be ramped up by one order of magnitude. Six ITER Domestic Agencies are involved in conductor procurement.
In pre-ITER times, the world production of niobium-tin (Nb3Sn) strands did not exceed 15 tonnes per year. Discovered in 1954, this intermetallic compound that exhibits a critical temperature of ~18 K and is able to withstand intense magnetic fields was used mainly in high field coils and nuclear magnetic resonance equipment.


To match the needs of ITER's 19 toroidal field coils (18 plus one spare), the world production capacity of Nb3Sn strand had to be ramped up by one order of magnitude. As of today, 400 tonnes of Nb3Sn have been produced by the industry of the six ITER Domestic Agencies involved in conductor procurement, representing 85 percent of toroidal field coil needs. 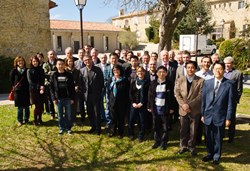 The latest Conductor Meeting took place on 19-20 March in Saint-Paul-lez-Durance.
Nb3Sn conductors will also form the core of the central solenoid, the backbone of the ITER magnet system. Strand production has been launched in Japan for the lower module (CS3L) and conductor lengths will be shipped at a later time to the US where the central solenoid will be manufactured.


For ITER's third major magnet system—the poloidal field coils—because the magnetic field they produce is less intense, they can be manufactured from the metallic alloy niobium-titanium (NbTi), which is cheaper and easier to produce than the brittle Nb3Sn.


The Russian-European collaboration that procures NbTi strands for ITER has already produced 80 tonnes of Strand 1, destined for poloidal field 1 and 6. China, responsible for the procurement of conductors for poloidal field coils 2 to 5, has registered nearly 50 tonnes of of NbTi Strand 2 into the Conductor Database (this essential tool monitors the strand, cable, jacket and conductor production of each Domestic Agency). China will send its first poloidal field conductor shipment to the ITER site within the next two months.


Altogether, conductors for the magnet systems account for 13 percent of the total ITER Project credits.

An ITER success story
Niobium-tin (Nb3Sn) strand production is a good example of an ITER success story that began five years ago with the signature of the very first Procurement Arrangements. Production was successfully ramped up worldwide. The main difficulty was to get the six procuring Domestic Agencies and their suppliers to adopt and implement a common quality assurance/quality control program that ensured uniformity and stability of production among the eight suppliers and over the duration of production. The web-based Conductor Database developed by the ITER Organization was instrumental in enabling all partners to monitor on-going production. Five years down the line, all suppliers have been able to meet the demanding ITER Organization requirements and achieve production goals. This is likely to result in spin-offs—and possibly new potential markets—as it has, for the very first time, been demonstrated that Nb3Sn can be mass produced and meet tight tolerances.  Also thanks to ITER, three new companies that were set up by their respective governments for the purpose of fulfilling ITER obligations are now ready to enter the commercial market.
Arnaud Devred


The Conductor Meeting, which has been held twice a year since 2008 (at ITER in the spring and in one of the "Conductor Domestic Agencies" in the fall), gathers representatives of the ITER Organization, the Domestic Agencies and their suppliers.


"It is an opportunity to share and benefit from each other's experience," says ITER Superconductor Systems and Auxiliaries Section Leader Arnaud Devred who traditionally chairs the meeting. "As all conductors are now in the production phase, the feeling in our community is definitely optimistic. Everything is moving ahead and the collaborative spirit, not only between the ITER Organization and the Domestic Agencies but between the Domestic Agencies themselves, is truly excellent."