Commr. Busquin was key in Europe's bid for ITER 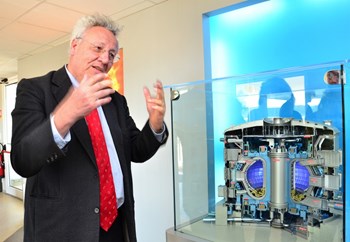 ''As a nuclear physicist,'' says former European Commissioner Busquin, ''I could measure what was at stake with fusion; as a politician, I knew Europe had to be daring. And I was optimistic...''
ITER owes a lot to a few individuals who, at decisive moments in the project's history, made decisions that changed the course of events.


Philippe Busquin is one of them. In 2001, as European Commissioner for Energy (1999-2004), he played a key role in pressing the Commission to commit itself to actually realizing ITER.


"I took the responsibility to launch ITER," he recalls. "At the time, the European effort to develop fusion was quite diluted amongst several associations. ITER was still a paper project and I felt it was high time to get on to the experimental phase."


2001 was a defining year for ITER. A new design for the Fusion Energy Advanced Reactor ("ITER-FEAT") had been approved by the ITER Council; Canada had proposed to host the installation; local governments in Provence were mobilizing to promote the Cadarache site... For Busquin, the time was ripe to take action.


"As a nuclear physicist, I could measure what was at stake with fusion; as a politician, I knew Europe had to be daring. And I was optimistic..."


Two years later, in 2003, Europe had two sites to offer to ITER—one in Vandellòs, Spain; one in Cadarache, France. Busquin considered at the time that this "double offer" was proof of Europe's determination to host the project. 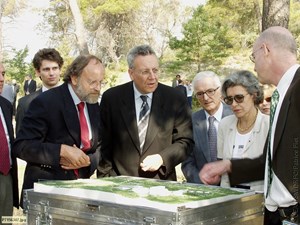 
"I was standing close to where we are now, with French Research Minister Claudie Haigneré and all the people who worked so hard to make ITER happen here—of course the landscape was quite different but I can still recognize the place."


Philippe Busquin, now retired from public affairs (but still active in promoting collaboration between industry and the academic world) took some time from a vacation with his wife and son to meet ITER Director-General Osamu Motojima and visit the ITER site last week.


As for the future of ITER, he is as optimistic in 2013 as he was in 2001. "With ITER we are working at the limits of about every available technology," he says. "We cannot begin to imagine the benefits of such a venture. But the project is also a first in terms of international governance and management. In this respect also, what we are learning will have huge consequences for the future."