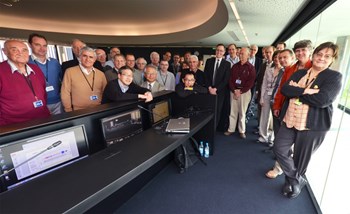 The IOS Topical Group (TG) is one of seven topical groups in the ITPA whose main role is to integrate plasma operation scenarios for burning plasma experiments, particularly for ITER, including inductive, hybrid, and steady-state scenarios.
The 10th Integrated Operation Scenarios (IOS) International Tokamak Physics Activity (ITPA) meeting was held in the ITER Council Chamber from 15-18 April 2013. There were 30 external participants from the ITER Members and a number of representatives from the ITER Organization. The external participants include representatives from the main magnetic fusion devices and modellers from the ITER Members.


The purpose of the meeting was to discuss the experiments and modelling being carried out around the world in support of the ITER design and plasma operation as well as to align the priorities for future R&D with the latest ITER priorities. The IOS Topical Group (TG) is one of seven topical groups in the ITPA whose main role is to integrate plasma operation scenarios for burning plasma experiments, particularly for ITER, including inductive, hybrid, and steady-state scenarios. The IOS-TG also recommends physics guidelines and methodologies for the operation and design of burning plasma experiments. The ITPA topical groups all meet every six months in one of the countries of the ITER Members. This was the first time the IOS-TG met at ITER, allowing the members and experts of the IOS-TG to see first-hand the progress in ITER construction.


Experimental and modelling results were presented from Alcator C-Mod, ASDEX-Upgrade, DIII-D, JET, JT-60U, and KSTAR of ITER-relevant plasma operational scenarios. Experimental results concentrated on inductive and hybrid scenarios; modelling of steady-state scenarios was also presented. Modelling of burning plasma and energetic particle physics were presented as well as plasma rotation in ITER and their impact on operational scenarios. The predicted plasma rotation profiles in hybrid scenarios were strongly peaked with rotation up to nearly 200 km/s, corresponding to about 4 kHz rotation in ITER in the centre. The effects of the Edge Localized Mode (ELM) coil fields on fast ion losses comparing vacuum fields and the plasma response were also shown, indicating that when the plasma response is included, the fast ion losses are acceptable even at high performance with the maximum ELM coil current.


The IOS-TG also concentrates on plasma control including experiments and modelling of profile control as well as development of the preliminary design of the ITER plasma control system (PCS). A review of the PCS conceptual design was presented as well as an action plan for how the experimental and modelling programs within the ITER Members can contribute to developing the PCS preliminary design for First Plasma and early hydrogen and helium plasma operation. Modelling of control of the entry into a burning plasma regime was also presented. A proposal was made to integrate experiments and modelling of plasma control schemes for ITER in existing experiments so that these control schemes can be developed before ITER operation to reduce run time on ITER for control scheme development. A request was made for the ITPA to provide control priorities for the ITER actuators starting with a few phases of plasma operation.


As part of the ITPA response to the question of starting ITER with an all-tungsten divertor, the IOS-TG discussed the effect of a tungsten divertor on operational scenarios. Reports from DIII-D, ASDEX Upgrade, and C-Mod compared operation with carbon walls and metal walls. Although there were some differences, it was generally believed that ITER would be able to learn how to operate with beryllium walls and an all tungsten divertor.


Modelling of ITER and JET current ramps were also presented indicating the differences between operation with carbon walls and with the ITER-like wall on JET. Since the peak in radiation for tungsten occurs around a temperature of 1 keV, the radiation from tungsten will be peaked near the edge in ITER. There is still a question about whether or not the tungsten transport into the core can be controlled to a sufficiently small value.


Modelling of steady-state fusion plasma scenarios was also presented to understand how the present heating and current drive systems should perform as well as what upgrades might be required to meet the long-pulse goals of the ITER program. The modelling includes simulation of sawtooth control, kinetic integrated modelling, and parameter scaling from existing experiments to ITER steady-state regimes. An update was also given on the latest proposed changes to the steering of the electron cyclotron heating and current drive system that was followed by extensive discussion.


In summary, the meeting provided valuable information on recent experiments and modelling of ITER plasma operation scenarios. Actions for the ITPA members and experts to help define the preliminary design of the ITER plasma control system were agreed upon. Continued experiments and modelling to demonstrate ITER operational scenarios for the inductive, hybrid, and steady-state scenarios were presented. A special report on the impact of an all-tungsten divertor on ITER operational scenarios was also discussed at length.