Share Tweet
On 25th anniversary, Tore Supra enters the museum
Alain Bécoulet, Head of IRFM (far left), is convinced that the machine's future will be no less brilliant and exciting than its past. Richard Kamendje of IAEA (right) stands next to Director-General Motojima and Mrs Motojima.
At age 25, Tore Supra is still far from being a museum piece. It is in a museum however that the anniversary of the CEA-Euratom tokamak was celebrated last Tuesday evening in Aix-en-Provence.


Why a museum? Why not ... the old priory of the Knights of Malta, now the Musée Granet, was the perfect venue for the informal commemoration, providing a large shaded courtyard for the speeches, beautiful rooms to wander through and exceptional works of art to admire...


As he briefly retraced the history of fusion research and the part played by Tore Supra, Richard Kamendje of the International Atomic Energy Agency, drew this parallel between fusion science and art:  "Every generation," he said, "faces similar challenges. But because you are living in a certain moment in history, you answer these challenges with the tools that belong to your time."


One of the very first fusion machines to implement superconducting coils, Tore Supra certainly rose to meet several challenges over its 25 years of operation. Originally led by the installation's designer Robert Aymar, Tore Supra teams explored the domain of long plasma discharges, achieving a record six-and-a-half minute "shot" in 2003 that produced one Gigajoule of energy.


An anniversary is an occasion to reflect on the past, often with emotion, and to welcome the future, often with enthusiasm. Both Alain Bécoulet, the present Head of CEA's Research Institute on Magnetic Fusion ( IRFM, the laboratory that operates Tore Supra), and his predecessor Michel Chatelier (2004-2008) expressed their conviction that the machine's future will be no less brilliant and exciting than was its past. 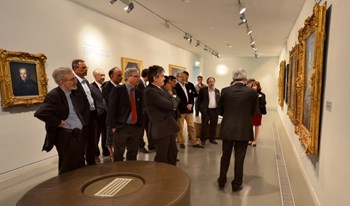 The ''family reunion'' ended with a private tour of the Musée Granet, guided by curator Bruno Ely.
For Tore Supra and the IRFM team, this future has a name: WEST (W Environment in Steady-state Tokamak, where "W" is the chemical symbol of tungsten). The project, which consists in installing an ITER-like full tungsten divertor, "will bring Tore Supra into the group of fusion devices that are actually preparing for ITER," said Bécoulet. The formal decision to "go WEST" was taken by CEA on 7 March 2013; the first experiments will begin in 2015.


The "family reunion," which was attended by ITER Director-General Osamu Motojima, several senior ITER staff and some STAC members present in Saint-Paul-lez-Durance for their biannual meeting, ended with a private tour of the Musée Granet, guided by curator Bruno Ely.


Conversations on tungsten, plasma confinement, magnetic geometry and actively-cooled components gave way to considerations, no less passionate, about art: Cézanne's early works (eight of which are on loan to the museum), 15th century French painting exemplified by a wonderful Virgin in Glory by the Master of Flémalle, and what Ely considers to be the jewel of his museum—a small, dark Rembrandt: Self-Portrait with Béret.