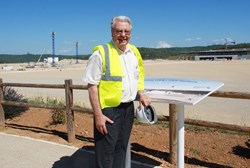 French physicist Robert Aymar pictured during a visit to the ITER site in July 2011.
Robert Aymar, former director of the ITER project (1993-2003) and director-general of CERN (2004-2008), has been selected to receive the IEEE Max Swerdlow Award for Sustained Service to the Applied Superconductivity Community (2012) for his technical and managerial leadership at CERN and ITER and for the use of superconducting magnet technology in high energy physics and fusion energy projects.


The award will be presented on 15 July 2013 during the opening session of the 23rd International Conference on Magnet Technology (MT-23), which will be held this year in Boston, USA. The award consists of an engraved plaque, an honorarium of USD 5,000 and an inscribed medallion made of niobium—the metal most commonly used in superconductor applications.


The award citation recognizes Aymar for sustained service to the applied superconductivity community that has had a lasting influence on the advancement of the technology and for leadership in the development of many large-scale superconducting magnet systems such as Tore Supra, the Large Hadron Collider (LHC) and ITER. The award also recognizes his role in directing research for the next-generation devices beyond the LHC and ITER, in chairing numerous committees for the promotion of academic research, and in organizing workshops related to applied superconductivity and large-scale superconducting magnets.


Following his studies at the prestigious Ecole Polytechnique in Paris, Aymar joined the French Alternative Energies and Atomic Energy Commission CEA in 1959. Early in his career he focused on fundamental research in plasma physics and applications for controlled thermonuclear fusion.


In 1977, he was appointed director of the Tore Supra project in Cadarache (France) dedicated to research on the magnetic confinement of hot plasmas towards steady-state operation. He oversaw the project from conceptual design, through construction, and up to its operational kick-off in 1988 when he became head of the CEA's Department of Fusion Research.
In 1990, he was appointed director of the Division of Fundamental Research in Natural Sciences at CEA, running a wide range of basic research programs including astrophysics, particle and nuclear physics, condensed matter and climatology, as well as thermonuclear fusion.


Aymar took charge of the international research program to prepare for ITER construction in 1994. He then spent five years as the Director-General of CERN, from 1994 on, overseeing the construction and launch of the LHC.


Since January 2009, Aymar has served as a Senior Scientific Advisor to the Chairman of the CEA.


The IEEE Max Swerdlow Award for Sustained Service to the Applied Superconductivity Community has been presented to a total of 11 individuals in the past 12 years by the IEEE (Institute of Electrical and Electronics Engineers) Council on Superconductivity. Within the applied superconductivity community worldwide, this award is considered the premier distinction for the recognition of technical service in the field.


Additional information is available at www.ieee.org