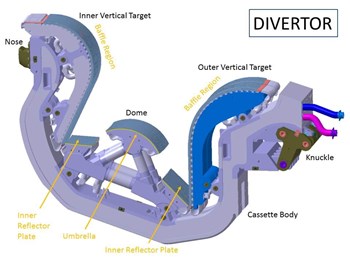 One of ITER's 54 divertor cassettes with full tungsten armour: The inner and outer vertical targets are the components directly facing the plasma. They intercept the magnetic field lines and thus remove the heat load coming from plasma via conduction, convection and radiation. The ''umbrella,'' which is located below the separatrix, baffles neutrals, particularly helium. The particle reflector plates protect the cassette body from plasma radiation, allow transient movements of the strike points and provide improved operational flexibility of the divertor in terms of magnetic configuration.
Last week, the ITER Organization concluded the final design review for a full-tungsten ITER divertor. In this three-day assessment, which was the culmination of eighteen months of design, analysis, testing and development, the readiness and the feasibility of a full-tungsten variant capable of withstanding the extreme conditions in ITER were assessed. Challenges related to the specific nature of tungsten were identified and dealt with. "The completed design now requires some refinement with respect to the local shaping of the tungsten monoblocks," said Philippe Mertens from the Research Centre in Juelich, Germany, who chaired the review.


Almost five years ago, in its 60th issue, the ITER Newsline announced the upcoming final design review of the divertor system. At that moment, the ITER approach was to begin plasma operations with carbon fibre composite (CFC) on the regions of the divertor's vertical targets that are expected to receive the highest heat loads. All other plasma-facing surfaces would have been armoured with tungsten.


So much for the non-active phases of plasma operation. The ITER approach for the following phase—nuclear operation with deuterium and tritium—was to replace the carbon-tungsten divertor with a full-tungsten variant. 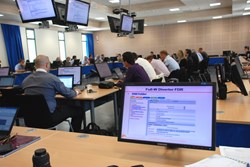 The three-day assessment from 26-28 June was the culmination of eighteen months of design, analysis, testing and development to explore the readiness and the feasibility of a full-tungsten divertor variant for ITER.
Carbon presented two major drawbacks as divertor armour material: it reacts chemically with the plasma fuel tritium and it traps the fuel like a sponge, leading to enhanced material erosion and unacceptable levels of tritium retention within the machine. Tungsten (W), on the other hand, has the advantage of not absorbing tritium, but at the same time it doesn't offer the same forgiving behaviour as carbon in terms of compatibility with the plasma.


In September 2011 budget restrictions forced the ITER Organization to reconsider its Baseline divertor strategy. By launching operations with a full-tungsten divertor from day one, one of the three divertors planned for ITER's 20-year operational phase would be eliminated.


A comprehensive investigation was launched in 2011—the tungsten divertor qualification program—in consultation with the procuring Domestic Agencies in Russia, Europe and Japan. The program comprised full-scale prototype manufacturing and testing.


While many of the features of the existing CFC/W Baseline design are applicable to a full-tungsten divertor for ITER, there are some key differences. Employing metal in high heat flux areas for example requires particular attention—where carbon was known to have favorable properties for the "plasma machining" of misaligned edges (due to manufacturing and assembly tolerances) these do not to apply for tungsten. 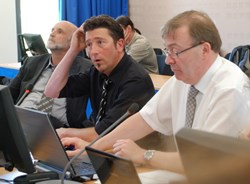 The heads of the design review (from right): Chairman Philippe Mertens, Frederic Escourbiac and Jochen Linke (also from Research Centre Juelich).
Attention must also be paid to the global shaping of the upper baffle areas of a tungsten divertor, where off-normal events such as a sudden vertical displacement of the plasma are predicted to lead to extremely heavy heat loads. Through the slight tilting of the targets and through particular shaping of the outer baffle (very much like the shaping of the first wall of the blanket) some promising results have been obtained that were presented during the design review.

Heavy stone
The word tungsten comes from the Swedish language, "tung sten" meaning heavy stone. In the periodic system the element with the atomic number 74 is noted under W, named after the mineral wolframite. Tungsten has the highest melting point of all the elements. Also remarkable is its high density of 19.3 times that of water, comparable to that of uranium and gold, and much higher (about 1.7 times) than that of lead.

High heat flux tests performed last year at the newly completed ITER Divertor Test Facility in Russia—with prototypes manufactured by Japanese industry that were exposed to 10 MW/m2 over 5000 cycles and 20 MW/m2 over 1000 cycles—demonstrated no macroscopic cracks, de-bonding or traces of melting. Similar tests run for 300 cycles at 20 MW/m2 have been performed by European industry with optimistic results.


A "melt experiment" consisting in the deliberate melting of tungsten tiles has been proposed for JET this summer to better understand the behaviour of the molten layer and the consequences of operating a machine on re-solidified W layers.


"It is now expected to report the last findings on this full-tungsten divertor variant to the next ITER Council Science and Technology Advisory Committee (STAC) in October 2013, to obtain a recommendation on the divertor armour for ITER. The objective would be to implement the decision into the Baseline by the end of the year," said Frederic Escourbiac, leader of the Tungsten Divertor Section, who was clearly satisfied by the outcome of the particularly intense three-day design review.