Just an IT guy 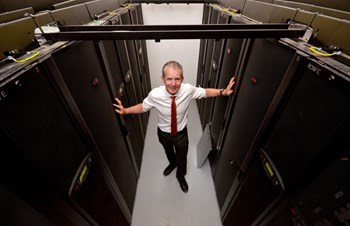 ''I come with plenty of ideas,'' says the recently appointed head of the Project Information System Section (IT), ''and I have found everyone very receptive.''
Jörg Klora's first encounter with a computer was way back in the mid-1970s when cupboard-sized mainframes called "mini-computers" delivered the power of present-day pocket calculators. The machine belonged to his father's construction company and in 1975—the very year that Microsoft was founded—15-year-old Jörg designed his first software to do calculations for pricing and bookkeeping.


A couple of years later, while studying physics in Munich, he created his own company, producing software that addressed one of the headaches of that era: compatibility issues between computers of different brands. Thanks to 17-year-old Klora, an Amiga computer could all of a sudden "see" an IBM PC and vice versa, and the life of thousands of users was changed for the better ...


Computers and software have always been part of Jörg Klora's life. However, he never viewed these tools and techniques as an end in themselves, but rather as a convenient and efficient manner to "help people" make big things happen.


At age 52, the career of ITER's new head of the Project Information System Section (IT) is a mix of high-level physics, big science project support and large team management ... all closely connected by the need for strong computing power and reliable software support.


Because he "liked to understand things," the young geek embraced physics and in 1988 joined the Institut Laue Langevin in Grenoble, France, to do his doctorate.


Four years later, having explored the secrets of the element Gadolinium 156, he moved on to the European Synchrotron Radiation Facility (ESRF) in Grenoble to head the Beam Line Instrument Software Support (BLISS)—an acronym, he says, that perfectly defined the atmosphere in the group.


One of the most meaningful experiences in his career as a physicist and IT specialist was his participation in the creation of ALBA, the Spanish synchrotron radiation facility. "We started from scratch in 2004—discussing notes we had jotted on a yellow post-it in a university cafeteria. We ended up with a state-of-the-art, EUR 200 million facility staffed by hundreds of international scientists."


Jörg was to spend eight years at ALBA, managing the Computing and Control Division.


"I'm just an IT guy," he likes to quip. But when you add the doctorate in nuclear physics, an executive MBA from the prestigious HEC School of Management in France, a master's degree in law from Pompeu Fabra university in Barcelona, and a brush of training in human resources you get a rather peculiar profile for an "IT guy."


What led him to explore these different and seemingly unrelated domains? "It's like opening a cupboard out of simple curiosity," he says. "You pull open the door and you find a cathedral ..."


After ALBA entered operation, ("It was a bit my baby," he admits) Jörg was ready for a new adventure, this time with what he calls "the biggest thing in the world"—the ITER Project and its many-faceted challenges.


In IT as in other domains, ITER is now entering a second "age" with construction and component manufacturing well underway. "I come with plenty of ideas," says Jörg, "and I have found everyone very receptive. A tremendous amount of high quality work has been done over the past five or six years. What we need now is to create personal accountability for every project, rationalize our support and develop continuous service improvement. Basically: tell me what problem you're having—we'll solve it."