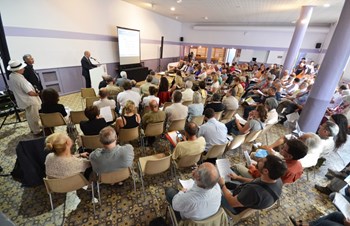 On Wednesday 3 July the Local Commission for Information (CLI) organized a public meeting in the neighbouring village of Vinon-sur-Verdon.
The complexity of ITER—not only of its science and technology but also of its governance and legal framework—leaves room for many a misunderstanding.


This was amply demonstrated last Wednesday 3 July during the public meeting that the Local Commission for Information (CLI) had organized in the neighbouring village of Vinon-sur-Verdon.


The CLI is the official citizens' watchdog group that acts as an interface between the ITER Organization and the local population. Anything that the public feels it should know falls under the CLI's jurisdiction. And there are many things that, quite legitimately, the public wants to know about ITER.


Since it was established two and half years ago, the CLI has focused on nuclear safety issues, which has led to a fruitful dialogue between the 42 CLI members and ITER's Department of Safety, Quality & Security.


Lately, the focus has shifted from nuclear safety to the economic and social impact of the ITER Project. And at last Wednesday's public meeting in Vinon, questions about the planned arrival of some 3,000 workers on the ITER worksite dominated the (heated) debate.


Where will the workers come from? What accommodations have been prepared for them? How will they commute to the ITER worksite? 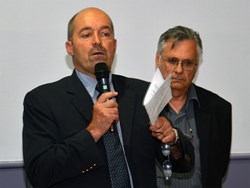 1,500 to 2,000 workers needing accommodation ''is not an unbearable load considering that the population pool around ITER numbers 200,000,'' said Vinon mayor Claude Cheilan (left, next to CLI's Alain Mailliat).
Certain groups have long voiced concern over the legal status of the ITER  workers. Recently, too, in blogs and articles published in France, the worry has been expressed that they will be underpaid and deprived of social protection.


As was made clear by the presentations given by the ITER Organization, Agence Iter France, Vinci (which leads the consortium that will build the Tokamak Complex) and representatives of the French authorities, these worries and concerns are totally unfounded.


All workers on the ITER site, whatever their nationality or that of the company employing them, will be subjected by law to French labour regulations and to the collective agreements (convention collective) that govern specific branches. This is the case now on the ITER site, as it will be the case when the number of workers doubles, triples and quadruples.


Addressing another point of concern—that ITER will be built by mainly foreign workers—figures were provided that showed that of the 3,000 workers expected, the majority will be recruited in France. Ten to twenty percent only will originate from the rest of Europe. (Statistics from another large construction project in France—the European Pressurized Reactor (EPR) in Flamanville—confirm these projections.)


During the meeting, misunderstanding was also prevalent over worker transport and accommodation. Considering the difficulty of finding decent housing at a reasonable price in Provence and the already heavy traffic on the roads around ITER, the local population is legitimately preoccupied by the peak in construction activities on the construction site. 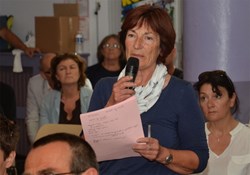 Anything that the public feels it should know falls under the CLI's jurisdiction. And there are many things that, quite legitimately, the public wants to know about ITER.
Not all of the 3,000 workers will be looking for accommodation, however, as a significant proportion of workers will be hired locally through companies that subcontract to the main consortiums.


Estimations range from 1,500 to 2,000 workers needing accommodation—still a high number but, as Vinon mayor Claude Cheilan noted, "this is not an unbearable load considering that the population pool around ITER numbers 200,000."


Working closely with mayors all around ITER, Agence Iter France has conducted a survey of available housing and identified 19 locations where accommodation solutions could be developed within 30 minutes of ITER. Transportation to and from work will be organized, and rationalized, by the companies operating on the ITER site, who have a contractual obligation to provide it to the workers.


The steady rise in the construction workforce expected at ITER clearly presents organizational challenges that must be addressed and explained to the public. That's one of the lessons from last Wednesday's public meeting.