3,000 sensors for detecting the quench 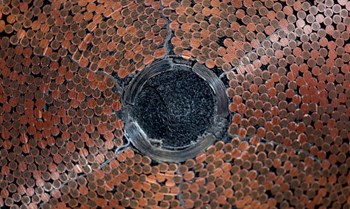 
When cooled to the temperature of 4.5 Kelvin (around minus 269 degrees Celsius), ITER's magnets will become powerful superconductors. The electrical current surging through a superconductor encounters no electrical resistance, allowing superconducting magnets to carry the high current and produce the strong magnetic fields that are essential for ITER experiments.


Superconductivity can be maintained as long as certain thresholds conditions are respected (cryogenic temperatures, current density, magnetic field). Outside of these boundary conditions a magnet will return to its normal resistive state and the high current will produce high heat and voltage. This transition from superconducting to resistive is referred to as a quench.


During a quench, temperature, voltage and mechanical stresses increase—not only on the coil itself, but also in the magnet feeders and the magnet structures. A quench that begins in one part of a superconducting coil can propagate, causing other areas to lose their superconductivity. As this phenomenon builds, it is essential to discharge the huge energy accumulated in the magnet to the exterior of the Tokamak Building.

Despite 23,000 tons of steel, the ITER machine won't be a rigid, unmoving block. As the magnets are cooled down progressively, or as they are powered up according to ITER's plasma scenarios, the machine will "breathe" and move. Quenches may occur as the result of mechanical movements that generate heat in one part of the magnet. Variations in magnetic flux or radiation coming from the plasma can also cause quenches, as well as issues in the magnet cryogenic coolant system.

Magnet quenches aren't expected often during the lifetime of ITER, but it is necessary to plan for them. "Quenches aren't an accident, failure or defect—they are part of the life of a superconducting magnet and the latter must be designed to withstand them," says Felix Rodriguez-Mateos, the quench detection responsible engineer in the Magnet Division. "It is our job to equip ITER with a detection system so that when a quench occurs we react rapidly to protect the integrity of the coils."


"A quench is not an off-normal event," confirms Neil Mitchell, head of the Magnet Division. "But we need a robust detection system to protect our magnets, avoid unnecessary machine downtime, and also as a safety function to discharge large stored energy and avoid damage to the first confinement barrier—the vacuum vessel."


Quench management will be a two-fold strategy in ITER: first quench detection, then magnet energy extraction. The time between detection and action has to be short enough to limit the temperature increase in the coil and avoid any damage. "We have on the order of 2-3 seconds to detect a quench and act," says Felix.

The different phases of a quench viewed in a graph: The propagation phase (A), seen as a rise in resistive voltage; holding time (B), during which the signals from different instruments are compared; and, We act (C)! Current breakers are opened and the current begins to decay.
The primary detection system—called the investment protection quench detection system—will monitor the resistive voltage of the superconducting coils (there is also a secondary detection system, see box below). Why the voltage? "Whereas during superconducting operation the resistive voltage in a coil is practically zero, a quench would cause it to begin to climb," explains Felix. "By comparing voltage drops at two symmetric windings for instance, the instruments will detect variations of only fractions of a volt."


Above a threshold level, these variations trigger a signal that is sent to the central interlock control system. In order to avoid unnecessary machine downtime, specific signal processing is required within the quench detection system to discriminate the resistive voltage from the inductive one due to the variations of the magnetic field—that is, to distinguish "true" signals from "false."

In addition to its primary quench detection system, ITER will have a safety class quench detection system that performs the safety function of initiating a fast discharge of the toroidal field coils in the event that a quench has failed to be detected by the primary system. The purpose of this safety action is to safely discharge the large stored energy, removing the hypothetical risk of damage to the vacuum vessel and its extensions that provide the first confinement barrier for the in-vessel radioactive material inventory.

"The Tokamak environment will be a very noisy one for our instruments—that's one of the challenges of quench detection in ITER," says Felix. "The difficulty will be to cull out false triggers while at the same time not allowing a real quench to go undetected," says Felix. "We have tried to build enough redundancy into the system so as to minimize false signals. We don't want to discharge the coils and lose machine availability if we don't have to."


If a quench is confirmed, the switches on large resistors connecting coil and resistors are thrown open and the magnetic energy of the coil is rapidly dissipated, avoiding any damage to the coils. For the toroidal field coils that have the largest amount of stored energy, 41 GJ, achieving total discharge can take about one a half minutes.


To detect the start of a quench in any part of the magnet system, voltage measuring instruments (over 3,000 sensors) will be integrated at regular distances onto ITER's coils, feeding bus bars, and current leads. Following the Manufacturing Readiness Review for coil instrumentation last December, the Magnet Division is currently in the phase of preparing over 20 individual tenders (~EUR 25 million). The instruments imply a variety of components and technologies to compensate inductive signals. Much process and material development has gone into the design of these systems.

Fabric tapes will be embedded in the insulation of the coils to pick up the electric induced voltage across unit lengths. This image shows the integration of co-wound tape into the conductor insulation (Credit: Iberdrola Engineering, ASG Superconductors and Elytt Energy).
In addition, an R&D collaboration has been underway at the superconducting Korean tokamak KSTAR since 2009 to learn more about compensating the electromagnetic fields. ITER is collaborating with the KSTAR magnet team to gather information on the electromagnetic signals picked up by the superconducting cables during plasma disruptions. This data will assist the ITER team in designing compensation systems to separate the electromagnetic noise of a disruption from a quench.
"Quench detection in ITER is the most challenging around," concludes Felix, who has approximately 25 years of experience in the field. "At the Large Hadron Collider (LHC), for instance, we were working with faster detection times. But in ITER, there will be a tremendous amount of interference for the instruments to sort through—electromagnetic noise, swinging voltages, couplings, perturbations. At ITER, we are also dealing with higher current, bigger common mode voltages, and larger stored energy. We'll be pushing quench detection and protection to the limit of technology today."