The way is now open 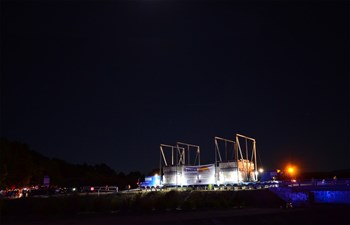 Stress measurement on the bridge at Peyrolles, 17 km west of the ITER site. Note the crowd on the left side of the image and the specialist collecting data at the foot of the bridge on the right side.
ITER site, 5:25 a.m. on Friday 20 September. The moon is high and, despite a sleepless night, so are the spirits. The huge trailer with its load of concrete blocks that replicates the size and weight of ITER's most exceptional components—800 tonnes in all—has rolled to a stop.


Among those present at that early hour there's a feeling of relief and a deep sense of accomplishment: the operation was a complete success.


Arriving on schedule and with only one minor incident the test-convoy has demonstrated the conformity of the ITER Itinerary with the rigorous technical specifications of ITER's most exceptional loads. The way is now open for the delivery of the actual components of the ITER Tokamak.


The journey had begun four nights earlier on the shores of the Étang de Berre, a small inland sea connected by a narrow channel to the Mediterranean. The self-propelled trailer, accompanied by a large escort of support personnel, vehicles, technical experts and gendarmerie motorcyclists got off to a start at around 9:45 p.m.

ITER Director-General Osamu Motojima rode with the test convoy on the last night from its departure point in Peyrolles on Thursday at 9:45 p.m. to the ITER site the following morning.
"This is indeed a very important moment in the history of our Project. And I want to express my deepest gratitude to the French authorities, Agence Iter France, Fusion for Energy and the logistics service provider DAHER for making this moment possible. The ITER Itinerary, upon which much of our success depends, is now validated. However, there was much more at stake during these past four nights. For many, the passage of the test convoy was the first 'physical' contact with the ITER Project. Their presence by the hundreds, their interest and curiosity, are a strong encouragement to work even harder for the success of ITER."

The setting in Berre was reminiscent of a village fair: complete with lights piercing the night, an exhibition tent (set up by Agence Iter France, the organizers), a large crowd of onlookers of all ages and the feeling of excitement that exceptional events generate.


Although local inhabitants are accustomed to the passage of exceptional convoys for the steelworks and refineries of the region, they had never seen such a monster: 46 metres long, 9 metres wide and 10 metres high, as heavy as two fully loaded Boeing 747s. 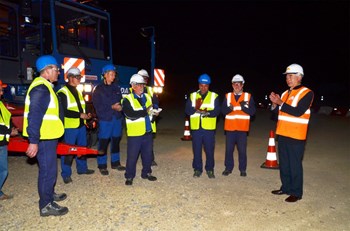 The convoy arrived on the ITER site at 5:25 a.m. Standing with ITER Director-General Motojima (far right) are members of the DAHER team, including the last-stage driver Karl Kilian (blue jacket); François Genevey, chief of ITER Project at DAHER (third from right) and Bernard Bon, head of convoy (second from right).
Combined with its escort of men and vehicles, the convoy formed a "sealed pocket" more than one hundred metres long, slowly progressing along public roads and some stretches of dedicated track and crossing the A7 and A51 motorways in four different locations. Measurements were made all along the 104-kilometre journey to verify that the stresses caused to the roads, bridges and roundabouts agreed with engineering calculations.


Parked in a secure area during the day, the convoy progressed night after night at speeds varying from 5-15 km/hour. It crossed three times over every bridge (backing up and going over them again) in order to take the required measurements. It is estimated that some 2,000 people came out along the different stages of the Itinerary to watch the passage of the ITER test convoy.

François Genevey, project chief for ITER at Logistics Service Provider DAHER:
"We've worked for months on the organization of this convoy. We were eager to confront our plans to the reality. It is now done and we are fully satisfied."

Although it will take several weeks to process and analyze all of the data that was collected over four nights, it was already clear on Friday morning that the reality was in near sync with the calculations—all measurements fell to within a few percentage points of what had been predicted.


The fourth and last leg of the journey was by far the most spectacular: the convoy had to negotiate the narrow main street of Peyrolles, cross the A51 motorway in order to bypass the tunnel of Mirabeau, weave along the road through Saint-Paul-lez-Durance and, last but not least, climb the steep incline of the heavy-duty track leading to the ITER platform (A tractor was attached to the trailer, adding 500 hp of pulling power).


At 4:45 a.m. on Friday 20 September, the convoy arrived at the last roundabout at the entrance of the ITER site. It took another 40 minutes to reach the parking area between the on-site concrete batching plant and the Cryostat Workshop worksite.

Pierre-Marie Delplanque, executive-director of Agence Iter France, was in charge of organizing the test convoy:
"Everything was extremely positive. We arrived on the ITER site on schedule, give or take a few minutes. There were a few minor incidents: a problem of alignment with one of the 88 pairs of axles, some instances of light skidding on the dedicated track when the incline was particularly steep... but nothing of consequence, really. This is what the test convoy was for: an experience to learn from. We have a few very simple improvements to implement."

As soon as the ignition key was turned off, two large cranes took position at its side to prepare for dismantling operations. By the following Monday, all 360 concrete blocks had been unloaded and the disassembly of the 88-axle vehicle was well advanced.


The successful conclusion of the test convoy operations bring to a close some eight years of preparation, from the first Itinerary feasibility studies to the final adjustments last year.


More images on the arrival of the ITER test convoy.
Read the Press Releases in English and French.