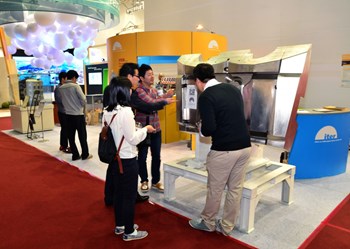 Manned by personnel from the ITER Organization and the Korean, Indian, Japanese and Russian Domestic Agencies, the ITER stand presents the later progress in both ITER construction and components manufacturing. 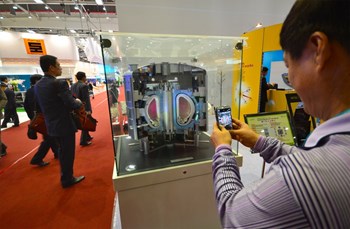 For ninety years since the establishment of the World Energy Congress (WEC), global energy issues have revolved around national politics, technology, the economy and—over the past four decades—the price of the oil barrel. Today, as can be felt here in Daegu, Korea, where the 22nd edition of WEC opened this Sunday, there's an added urgency to the matter: discussing energy in 2013 is discussing the future of our planet.


"Energy is a daunting challenge that must be addressed by the international community," said Korean Prime Minister Jung Hong-won as he spoke to some of the 6,000 delegates from 140 countries who have assembled here until Thursday. "It is vital that we form a coherent, long-term framework within which to plan and implement future investments," added WEC Chairman Pierre Gadonneix, the former CEO of the French utility company Electricité de France.


Never before has energy been so high on the agenda of world leaders. Every nation and the world as a whole must face what WEC has identified as the "energy trilemma" of the decades ahead—energy security, energy accessibility and environmental sustainability.


While WEC is about self-promotion, where the largest companies, state-owned power operators, ministries and regulatory agencies compete for the largest and most spectacular exhibition stand, it is also about inventing a vision and drawing scenarios for the future. Gadonneix said he expected "true engagement" from the many policy makers present here in Daegu. 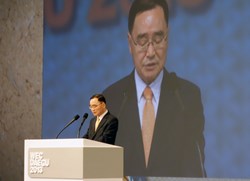 ''Energy is a daunting challenge that must be addressed by the international community,'' said Korean Prime Minister Jung Hong-won as he spoke to some of the 6,000 delegates from 140 countries who have assembled here until Thursday.
Now, can tomorrow's scenarios include fusion as a significant contributor to the energy mix and as an answer to the energy trilemma?


Early Monday 14 October, during a session entitled "Fusion: Betting on a different future?" participants ITER Director-General Osamu Motojima, former President of the Korean National Fusion Research Institute (NFRI) Korea Gyung-Su Lee and Minh Quang Tran, Director-General of the Centre for Plasma Physics at Ecole Polytechnique, Lausanne (Switzerland) replied yes—provided political commitment matches the talent and resources that fusion can already command and provided too that, once the DEMO stage is reached, the competition jumps in to accelerate the passage to fusion commercialization.


"ITER is a power amplifier," said Director-General Motojima. "DEMO will be a money amplifier ..."


Several experts drew an interesting parallel between fusion and the Apollo project in the 1960s. For Nebojsa Nakicenovic, a professor of energy economics at the Vienna University of Technology, "the fusion challenge is much bigger than that of Apollo fifty years ago. It's like going from the first flight of the Wright brothers to the first commercial jet."

Standing at the entrance of Hall 2, in Daegu's ExCo conference centre, the ITER stand features a real-size blanket module dummy, as well as mockups of the ITER and KSTAR Tokamaks, all provided by ITER Korea. The five-day participation of ITER at the 22nd World Energy Congress is jointly financed by ITER Organization and the seven Domestic Agencies.

Director-General Motojima suggested  a more poetic image: "Then, people could look at the Moon and dream of walking, which created massive support for Apollo. The Sun is another dream but you can't look at it for more than a couple of seconds..."


He also pointed out another connection between the two projects: "Helium 3 was discovered in great quantity in the rocks that were brought back from the Moon. And Helium 3 is the future fuel of fusion..."