They are building the physics basis for ITER 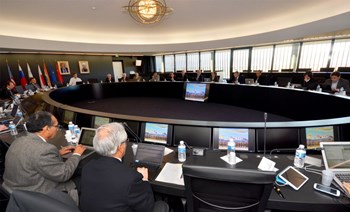 
How does the ITPA work?


ITPA is principally a group of physicists, and some engineers also, working in different fusion labs around the world and contributing to the establishment of a broad physics basis for ITER and what lies beyond — the DEMO project and future industrial fusion power plants.
How does this translate concretely?


Presently, ITPA coordinates 56 "joint experiments" in different tokamaks throughout the world. Suppose something interesting happens in ASDEX (Germany) for instance. We'll propose to reproduce it on, for instance, KSTAR (Korea) ... and then we extrapolate to ITER. This is the main idea: scaling towards ITER through extrapolation.


Experiments are not all, however. Theory and simulation play a large role in building knowledge and data into ITER. 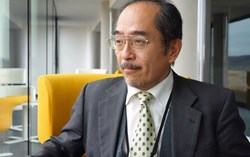 Yutaka Kamada, who has chaired the ITPA Coordinating Committee since December 2010, will be succeeded on 1 January 2014 by Abhijit Sen of the Institute for Plasma Research, India.
How do you choose your research priorities?


There are topics with some urgency attached to them and others that are more long-term concerns. The divertor material issue certainly fell into the first category and for two years we concentrated on it, asking the different topical groups to assess the advantages and disadvantages of tungsten. Eventually we recommended the use a tungsten divertor. And in October the ITER STAC agreed with this recommendation, leading the ITER Council, on 20-21 November, to endorse the Director General's proposal to commence ITER operations with a tungsten divertor, rather than a carbon-fibre divertor that would have been replaced during the second phase of operations


Before this, it was ELM control that kept us busy...


What are the present priorities, now that the divertor issue is closed?


In the "urgency" category, it is certainly disruptions. In the longer-term, it is steady-state operation. And of course, continuous physics research, which is our core activity.