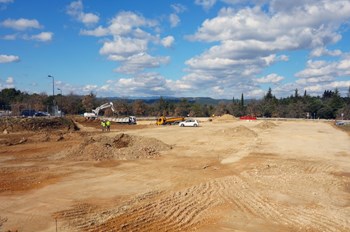 The vacant plot of land between the entrance road and the visitors' parking lot is being transformed into a 6,000-square-metre storage area for ITER components before they are assembled in the machine.
Construction works are booming at ITER — not only on the platform where work on a large workshop for the assembly of the cryostat and on the foundations for the Tokamak Complex are progressing visibly, but also near the road at the main entrance; at the "unfinished" end of the Headquarters building and, soon, on a new ten-hectare parcel that was recently made available to the ITER Organization by the neighbouring research centre CEA.


The ongoing works reflect the growing needs of the ITER Project.


The vacant plot of land between the entrance road and the visitors' parking lot is being transformed into a 6,000-square-metre storage area for ITER components (such as large drain tanks, electrical transformers and pipes ) before they are assembled in the machine.


ITER Building and Site Infrastructure is currently investigating the need for additional temporary structures as some of the components may require specific storage environments. Work is scheduled to be completed by April 2014.


In the parking lot nearby, 320 bays are being added in order to increase the overall capacity to more than 600 cars. Good news for the owners of large vehicles: the new bays will be 2.5 metres wide, 20 centimetres more than the legal minimum; eventually, all bays will be enlarged to meet this generous standard. The existing enter/exit ramps will also be enlarged.


These works on the parking lot are directly linked to the ongoing construction of the ITER Headquarters extension—an added "West Wing" that will accommodate 350 ITER staff and contractors  presently hosted in buildings one kilometre away. 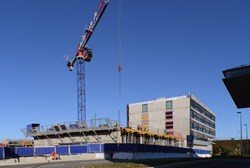 The ''West Wing'' addition to the Headquarters Building will accommodate 350 ITER staff and contractors presently hosted in buildings one kilometre away.
The 3,500-square-metre extension (5 storeys high, 35 metres long) will share the same architectural features as the existing building. It is scheduled to be handed over in September.


In July 2010, approximately 100 hectares of land, belonging to CEA, were officially made available to the ITER Organization for the duration of the ITER Agreement, which officially ends on 24 October 2042. On Friday 14 February, an amendment to the 2010 notarial deed provided for an additional 10 hectares of land located south of the ITER site and used as a Spoil Disposal Area during site preparation and the first excavation works.


On this plot of land, the ITER Organization is  planning to build a logistics platform for the unpacking, storage, re-packing, testing, maintenance and pre-fabrication of ITER components. The platform will include a 12,000 square metre warehouse and a 10,000 square metre outside storage area.


A call for tender for the design and construction was launched in October last year. The contract is expected to be awarded next month and construction should be completed in the second semester of 2015.
(With Sabina Griffith and Wouter Van Baren, BSI)