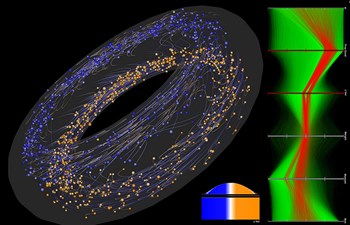 Simulation of microturbulence in a tokamak fusion device. (Credit: Chad Jones and Kwan-Liu Ma, University of California, Davis; Stephane Ethier, Princeton Plasma Physics Laboratory)
With the potential to provide clean, safe, and abundant energy, nuclear fusion has been called the "holy grail" of energy production. But harnessing energy from fusion, the process that powers the sun, has proven to be an extremely difficult challenge.


Scientists have been working to accomplish efficient, self-sustaining fusion reactions for decades, and significant research and development efforts continue in several countries today.


For one such effort, researchers from the Princeton Plasma Physics Laboratory (PPPL), a DOE collaborative national center for fusion and plasma research in New Jersey, are running large-scale simulations at the Argonne Leadership Computing Facility (ALCF) to shed light on the complex physics of fusion energy. Their most recent simulations on Mira, the ALCF's 10-petaflops Blue Gene/Q supercomputer, revealed that turbulent losses in the plasma are not as large as previously estimated.


This is good news for the fusion research community as plasma turbulence presents a major obstacle to attaining an efficient fusion reactor in which light atomic nuclei fuse together and produce energy. The balance between fusion energy production and the heat losses associated with plasma turbulence can ultimately determine the size and cost of an actual reactor.