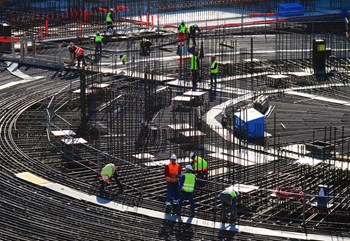 Spiders spin their web out of instinct. Rebar workers follow detailed execution drawings that result from a long chain of calculations...
Imagine a spider web made of steel threads that are 40 millimetres in diameter. Now imagine a structure that is built from 16 of these spider webs superimposed and you will have an idea of the complexity of the rebar at the centre of the Tokamak Complex Seismic Pit.


Spiders spin their web out of instinct. Rebar workers follow detailed execution drawings that result from a long chain of calculations that includes load and stress definition, safety requirements, code crunching and, eventually, the engineers' interpretation.


The process begins quite naturally with the definition of the buildings that the structural elements will support. How big are they? How much do they weigh? And what safety functions—such as protection against radiation, confinement, seismic isolation—must they fulfil?


But above and beyond the weight of the building itself, equipment loads must be taken into consideration—for example the 23,000 metric tons of the machine or the giant neutral beams injectors—as well as forces resulting from cryostat thermal shrinkage, possible seismic events, and normal or accidental vertical displacement of the Tokamak during operation. 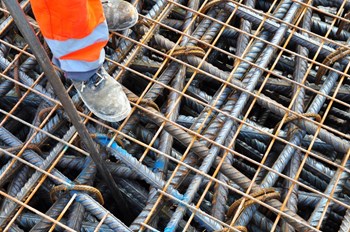 However dense the rebar, some access has to be preserved for the nozzle of the concrete pumps and the concrete vibrating tools.
"Safety provisions are also part of the calculations," stresses Laurent Patisson, who heads the Nuclear Buildings Section. "In some areas such as in the Tokamak support zone, safety provisions of 150 percent for what we call category IV events, such as the reference earthquake, have to be considered."


In an average building, loads are measured in decanewtons. In the Tokamak Complex, meganewtons are used. These units describe the force required to give an acceleration of one metre per second to a mass of one thousand tonnes ... every second.


Computing this impressive and voluminous data into models gives rebar design specialists the quantity of steel necessary to guarantee the robustness and safety of each edifice. "The code tells us how much steel by linear metre of concrete is required, but it doesn't say much about how the rebar should be arranged," explains Laurent. "This is for the structural analysis engineer from Engage to determine." (Engage is the European consortium that was awarded the Architect Engineer contract for the construction of the Tokamak Building.)


More than 4,000 metric tons of rebar will go into the Tokamak Complex foundations, the B2 slab, with steel density at its highest in the central, circular area that will support the ITER machine (one fourth of the total rebar).


The design work on this section was particularly demanding—the rebar arrangement must meet the required steel density while preserving the constructability of the slab. In simple terms: however dense the rebar, some access has to be preserved for the nozzle of the concrete pumps and the concrete vibrating tools.


The Rebar Minutes Drawings produced by the structural analysis engineer have now been refined by a draftsman and communicated to the contractor in charge of the actual laying of the rebar. Based on the detailed Construction Design Reinforcement Drawing, the contractor will implement its own methodology and techniques, validated by Engage. 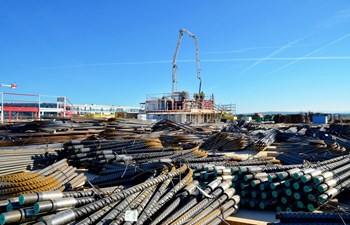 Four different areas of rebar, each presenting specific challenges (density, complexity) are reproduced at 1:1 scale in the B2 slab mockup. On Wednesday 16 April a trial was implemented on the most complex of these areas, where orthoradial and orthogonal rebar meet.
"The European Domestic Agency, the ITER Organization and a specialized contractor implement all the necessary controls," adds Laurent. "Site surveillance reports are produced twice a week by ITER's Building and Site Infrastructure Directorate and soon, it will be done daily."


Rebar workers are now proceeding. However for the most complex area of the rebar arrangement, where orthoradial and orthogonal arrangements meet, a last trial is being implemented on the 150 m², 1:1-scale B2 slab mockup located to the west of the Seismic Pit. "We need hands-on experience of the difficulties inherent to this type of interfacing," says Laurent.


Spiders definitely have it easier...