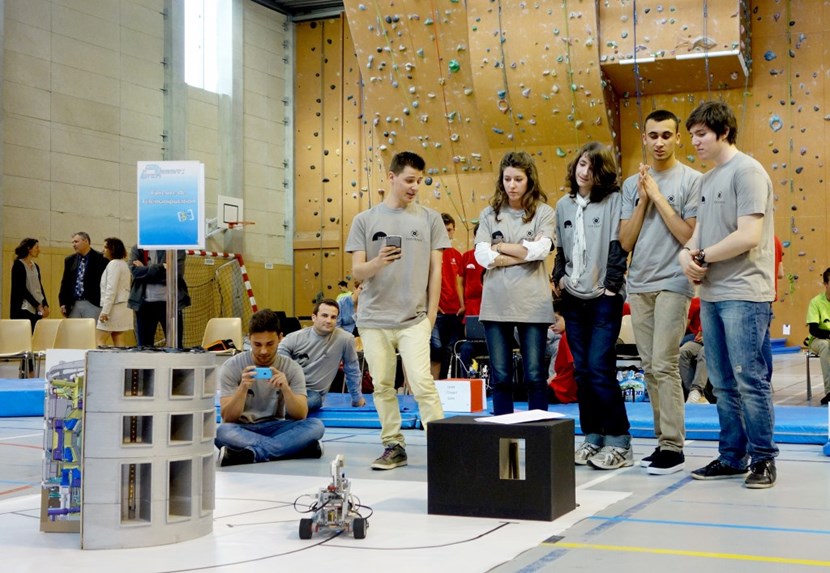 After nine months spent imagining, designing and programming their robots, ten teams from junior and high school had the opportunity to put them to the test in front of a jury made up of professionals.
Tusday 6 May was the final of the ITER Robots Contest, organized by Agence Iter France and the ITER Organization in collaboration with two French institutions—the Académie d'Aix-Marseille and the IRFM magnetic fusion research institute. For the second time running the city of Manosque was host to the competition, which has been run annually since 2012.


After nine months spent imagining, designing and programming their robots, ten teams—five from junior high school and five from high school—had the opportunity to put them to the test in front of a jury made up of professionals. "Getting involved in this contest is a glimpse into the life of a remote handling engineer," says engineer Jean-Pierre Friconneau, who works in remote handling at ITER. Alain Bécoulet, IRFM director, agrees: "The students tackled the kind of complex problem that we deal with every day of our professional lives in laboratory research.''


After a succession of time trials against the backdrop of cheers from some teams and sighs from others, students from the Gignac-la-Nerthe high school captured the victory with a robot called "ITERmine premier'' (ITER the First). A question of luck? Or rather a result of the hundreds of hours the students in engineering science had spent to bring their idea to fruition ...


The junior high students had a tougher time, with all teams facing last-minute problems and re-programming before the junior high school from the village of Pélissanne carried the contest. Once again, the competition reflected reality. ''A remote handling engineer faces this kind of problem on a regular basis. You have a design that might work in your laboratory, but that requires reprogramming when it's in situation,'' highlights Delphine Keller from IRFM.
The successful third edition of the ITER Robots contest ended with a round of applause for all the engineers-in-the-making who participated in the contest. And who knows, see you soon in ITER!