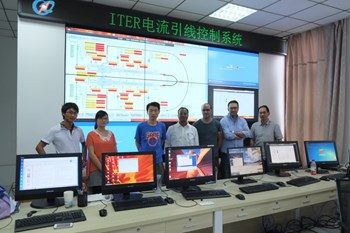 The satisfaction of collaborating on a solution that is in the interests of all parties: engineers from the ITER CODAC and Magnet Division with representatives of Tata Consulting and ASIPP.
Exactly one year after the first technical coordination meetings took place in the offices of Tata Consulting Services (Pune, India) between the engineers of the ITER Magnet and Control Divisions and their colleagues from the Chinese Institute of Plasma Physics (ASIPP), a fully operational control system was delivered and commissioned early July in Hefei, China.


The system will be in charge of operating the test bench facility under installation at ASIPP that will test all the high temperature superconducting current leads of the ITER magnet system that are under the responsibility of the Chinese Domestic Agency.


The ITER superconducting coils will operate at temperatures only four degrees above absolute zero and will be powered by converters located in buildings outside the Tokamak Complex. The connection of these cold magnets to the room-temperature electrical busbars providing the power is implemented by a series of one-of-a-kind components called high temperature superconductor (HTS) current leads.


The control system commissioned in July will be used from September on to cool down the first HTS lead prototypes manufactured by ASIPP and simulate the same scenarios that these critical components will experience when ITER operates.


The components of the control system were developed in Europe, using expertise from research institutions such as CERN. The whole system was assembled and tested at Tata Consulting Services and—at the beginning of this year—was finally delivered to China where it took up its final position in the cryogenic team's control room at ASIPP.


This has been an excellent opportunity to validate the modern hardware and software solutions chosen by the ITER Controls Division to build CODAC and the central interlock systems. The conception and construction of the control system was the occasion to identify potential issues and to optimize their design using real field experience and the very useful feedback from the engineers involved on this project.


The system has now been fully handed over to our ASIPP colleagues in Hefei but, of course, the Magnet and Control teams from ITER will continue to provide remote and on-field support throughout the entire test campaign which will extend through the coming years.


"This is a very good example on how effective collaboration at the technical level between different ITER divisions, a contractor in India and ASIPP can overcome issues related to the complex ITER Organization and converge to deliver technical solutions that serve everybody's interests," said Arnaud Devred, leader of the Superconductor Systems & Auxiliaries Section.