Listening to bubbles to prevent trouble 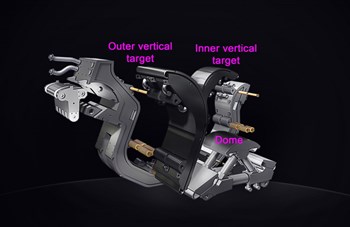 
Spacecrafts like the Space Shuttle are protected from the searing heat by a blanket of insulating tiles that evacuate the heat by radiation; in ITER, the heat will be evacuated by pressurized water circulating through the divertor at the rate of almost one cubic metre per second.


Water enters the complex cooling circuit of the divertor at forty times atmospheric pressure (4 MPa) and at a temperature of 70 °C. As it exits, temperature has risen to 120 °C and the heat is evacuated by way of a heat exchanger connected to the secondary circuit.


"Pressurized water has the capacity to evacuate the heat flux but it is essential that the water does not fully boil—once vapour becomes dominant we lose much of the heat exhaust capacity," explains Frédéric Escourbiac, head of the Tungsten Divertor Section at ITER.


There is, however, a particular regime that is welcome by engineers: it is a condition called "diphasic," where micro bubbles keep forming and collapsing in the water circuit. "We want this regime because it is very efficient in terms of heat exchange and keeps the temperature of the structure within the desired range."


The diphasic condition, however, is an unstable regime: under certain conditions, micro-bubbles grow and coalesce into a large, stable, resistive layer of vapour. This is an unwelcome situation because, when it happens, a large part of the heat exhaust capacity is lost. "In a few hundreds of milliseconds the component can be damaged," says Escourbiac.


This event is called "critical heat flux," "boiling crisis," or "burn-out." It is a thermal phenomenon that suddenly decreases the efficiency of heat transfer, causing the localized overheating of a component. It can be caused by the depressurization of the cooling system, the failure of a pump, or a sudden change in the plasma regime leading to a significantly higher heat load—a phenomenon known as "plasma reattachment."

Frédéric Escourbiac and his team, along with experts from the French CEA Fusion Research Institute (IRFM) have been at work since 2010 to develop an advance warning system that will detect the precursory noise of the micro-bubbles on the verge of coalescing. (Drawing courtesy of Xavier Courtois, IRFM)
Out of approximately 10,000 plasma shots, some 300 plasma reattachments are expected to occur in ITER during the first deuterium-tritium campaign, leading to heat loads up to 20 MW/m² for up to 10 seconds.


Although this estimation was taken into consideration when designing the ITER divertor to withstand heat loads of up to 30 MW/m2, Escourbiac acknowledges that "at 20 MW/m2, we're approaching the risk zone. It's acceptable, but we do not wish to enter into these conditions."


Experts from ITER and the French CEA Fusion Research Institute (IRFM) have been at work since 2010 to develop an advance warning system—a way of detecting the precursory noise of the micro-bubbles on the verge of coalescing.


At Areva's Technical Research Centre in Le Creusot, France, Escourbiac and his colleagues Sergey Bender and Alain Durocher use an electron gun to simulate the heat load (up to critical heat flux) that divertor components might be exposed to. They listen to the noise in the cooling circuit of a mockup and record the different frequencies to identify the indicator that will tell them that micro-bubbles are about to collapse.


"We have identified the precursory noise and we know where to install the 50-odd sensors that will be needed to monitor all the plasma-facing components," says Escourbiac. "The listening devices will be an integral part of the operational instrumentation, along with magnetic sensors, strain and stress sensors, thermocouples, etc."


Identifying the precursory signal of critical heat flux will allow for a swift counter-reaction: either halting operation or modifying the plasma regime before irreversible damage is done to the components.


The stakes are high: a damaged plasma-facing component in the divertor would mean at the very least a two-month interruption in operations.


Listen here to the eerie sound of a critical heat flux in a plasma-facing component mockup.