In Washington, exploring the "road ahead" 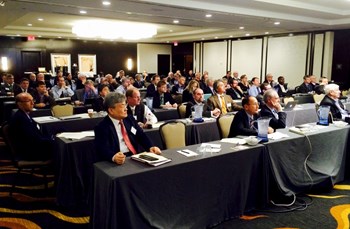 Over 40 talks were presented by scientists and government officials at the annual meeting of Fusion Power Associates in Washington D.C. on 16 and 17 December 2014. Sitting front row are Gyung Su Lee, from Korea's National Fusion Research Institute (first left) and Carlos Alejaldre, ITER Director of Safety, Quality & Security (third left).
On 16 and 17 December 2014, in Washington, D.C., Fusion Power Associates held its Annual Meeting and Symposium on the theme: "Fusion Energy: Recent Progress and The Road Ahead." About 100 people attended a rich agenda of presentations which provided a comprehensive overview of fusion research today.


Following a keynote address by Steve Cowley, Director of the Culham Centre for Fusion Energy in the UK, over 40 talks were presented by scientists and government officials. From the ITER Organization, Carlos Alejaldre, the Director of Safety, Quality & Security, presented the status of the project with "ITER: Where are we at?" and I gave a short contribution emphasizing the fact that communication is a strategic activity for ITER and fusion. There were also two specific sessions that reviewed research developments in magnetic and inertial fusion.


It was evident during the presentations that countries like China and South Korea are progressing well with their plans to take the next step after ITER. Wan Yuanxi, dean at the University of Science & Technology in Heifei, presented China's next-step machine called the Chinese Fusion Engineering Test Reactor (CFETR). "It is hoped," he said, "that the proposal for CFETR construction can be approved soon," with an eye to starting in the early 2020s and completing the project in ten years.


The picture is similar in South Korea: Gyung Su Lee, from Korea's National Fusion Research Institute, explained that Korea will not wait for ITER results to start on the KDEMO (Korean Demonstration Fusion Power Plant) project. Europe and Japan, although on a less aggressive timetable, are also planning for the steps beyond ITER.


In the US, in the context of budget reductions, the debate has centred on the balance between involvement in ITER and the domestic fusion activities and no clear timetable has been advanced for the next-step after ITER.