Bernard Bigot, from France, was appointed on 5 March 2015 in Paris where the ITER Council convened for a one-day Extraordinary Meeting. Representatives from all ITER Members were present.


Mr Bigot became ITER Director-General nominee during the Fifteenth Meeting of the ITER Council in November 2014. He presented an action plan to the ITER Council, which was endorsed during the meeting today. The action plan addresses, and is in line with, the recommendations of the most recent Management Assessment and stresses the importance of delivery of the revised project baseline. 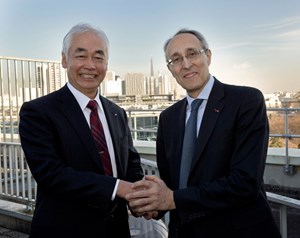 One of the first official acts of the new Director-General was to nominate his predecessor as Director-General Emeritus. © CEA- Philippe Dureuil
Bernard Bigot has taken up his duties immediately. He is the third Director-General of the ITER Organization, succeeding Osamu Motojima (2010-2015) and Kaname Ikeda (2005-2010).


In his long and distinguished career, Bernard Bigot (65) has held senior positions in research, higher education and government. Prior to his appointment at ITER he completed two terms (2009-2012 and 2012-2015) as Chairman and CEO of the French Alternative Energies and Atomic Energy Commission, CEA.


He has been closely associated with ITER since France's bid to host the project in 2003 and has acted since 2008 as the High Representative for the implementation of ITER in France.


In its decision today, the ITER Council emphasized Bernard Bigot's record as "an experienced senior manager of large programs and projects, a leader capable of finding common ground among ITER Members [and] an excellent communicator."