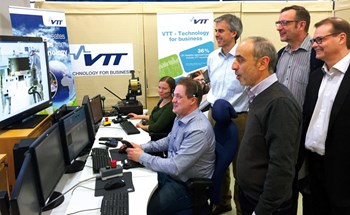 In the VTT Tampere the control room.
For Carlo Damiani—the European Domestic Agency's Project Manager for remote handling systems—and his team this is a big day.


They have just arrived in Tampere, Finland to witness the final demonstration ITER divertor remote handling (see article in this issue). There is an unusual buzz in the facility and every protocol needs to be respected. The remote handling operators take their positions in front of the big screens. All eyes are glued on the monitors as the 10-ton mockup of a divertor cassette starts moving gracefully along the rails. Parameters scroll by indicating speed, angle and the time left to complete the task. On the screens the cassette emerges slowly, subtly lifted and finally locking into place. They did it!


For Salvador Esqué, following the project on behalf of the European Domestic Agency, it's a feeling of relief and excitement. "It's almost like a camel going through the eye of a needle. Can you imagine the millimetric precision that is required and the weight that we are lifting and transporting? It's really impressive."


The test has been successfully concluded and Damiani is already thinking of the next steps. "What [has been demonstrated] is the beginning of a brand-new technology chapter written thanks to ITER. We need to design and manufacture remote handling systems that are resistant, agile and precise. It's an opportunity for industry, SMEs and laboratories to think out of the box, innovate in engineering, and shape the future fusion reactors." 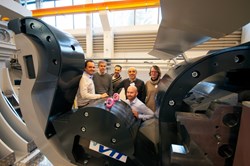 
Jouko Suokas, the Executive Vice President for Smart Industry and Energy Systems at VTT Tampere, host to the divertor test platform DTP2, was also present at the demonstration. After thanking his team, he commented: "Playing a role in this big-science project has helped us to generate new know-how. To give you an example, we have developed new expertise in areas like mechanical engineering, manipulator arms, special tooling, control system software, virtual reality and so on...The potential spin-offs and expertise are some of the key reasons of our involvement. The possible industrial applications are widespread in the field of industry, such as in off-shore movable machine manufacturers, power plants or manufacturing."