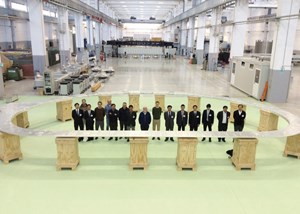 Representatives of the European and Japanese Domestic Agencies, Japanese manufacturers Toshiba and Mitsubishi, and the ASG consortium (ASG, Iberdrola and Elytt) pose inside of the completed, and successfully tested, prototype.
Europe has successfully completed tests on the first full-size, superconducting prototype of a toroidal field coil "double pancake."


Each one of ITER's giant, D-shaped toroidal field coils will contain seven double pancakes. These pancakes, or layers, are composed of a length of superconductor, which carries the electrical current, and a stainless steel D-shaped plate called a radial plate, which holds and mechanically supports the conductor through groves machined on both sides along a spiral trajectory.


In order to verify the prototype's ability to withstand the cryogenic temperatures of ITER, it was cooled to the temperature of liquid nitrogen (approximately -196 ˚C) and then returned to room temperature. The prototype was also thoroughly tested for its response to high voltage and was submitted to leak testing. All tests were passed without problem.


The successful completion of these technically demanding tests was celebrated as an important milestone in Europe, which is responsible for the fabrication of 10 toroidal field coils. (Japan will manufacture the other eight required for Tokamak assembly plus one spare.)


For Alessandro Bonito-Oliva, European Domestic Agency project manager for magnets, "it is an important technological step towards the manufacturing of one of the biggest and most complex superconducting coils ever produced." He credits successful collaboration with the manufacturing consortium (ASG Superconductors, Italy; Iberdrola Ingeneria, Spain; and Elytt Energy, Spain) and radial plate manufacturers CNIM (France) and SIMIC (Italy), as well as collaboration with the ITER Organization central team and the Japanese Domestic Agency.


Read the original story on the European Domestic Agency website.