R.J. Smits: "Fusion is at the core of Europe's long-term energy strategy" 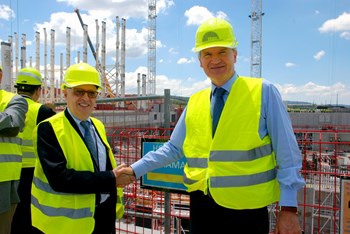 
ITER is a fascinating project, a complex project, a project for mankind. This is the only large-scale global project in which seven key partners from across the globe work together. There is not a single other field where we have this situation. So, from that point of view, ITER is unique. And it is also contributing to the enormous challenge we face to provide energy to our citizens and at the same time to decarbonize the economy.


Will this transfer change anything regarding the European participation in the project?


No, we have a first-class representative, Dominique Ristori, who knows the energy field inside and out, having worked more or less his whole career in energy and energy policy. He will now be responsible for the European budget for ITER, for the dedicated unit, and for representing EURATOM in the ITER Council. I am in full confidence that ITER matters will be in good hands and that Dominique will have the same passion for the project that I have had for the last five years.


So, the transfer can be interpreted as a positive message? A message that fusion energy is taken seriously as a future energy option?


Yes indeed. It means that ITER is taking its place in the long-term energy strategy of the European Union, and that it is no longer seen as just a science project. It is at the core of our energy policy. And it is interesting to note that my colleagues at the ITER Council mentioned this transfer in their opening comments as a very welcome signal from Europe.


We are also very happy that Bernard Bigot is now the Director-General. He is the right person to lead the project into its next phase: construction. The main first deliverable of Bernard Bigot is to establish the baseline (the schedule, the budget and the scope of the project) which will then be presented to the ITER Council in November for approval. So we have some very interesting months ahead of us with the ITER Council taking stock and validating the baseline. This will then most likely be followed by a Ministerial conference in the first half of 2016, where all these issues need to be discussed, including the acceptance of delays. And that requires that the politicians take their responsibility. That's why we, as European representatives, have called for a Ministerial Conference.


How do you feel about handing over the responsibility after having helped to manoeuvre ITER through some troubled times?


I have mixed feelings since I have always been passionate about the project. However, after having represented EURATOM for five years in the ITER Council, I think I have done my share. Now the moment has come to hand it over to a good colleague and a dear friend who will help to bring ITER to its next phase, construction.