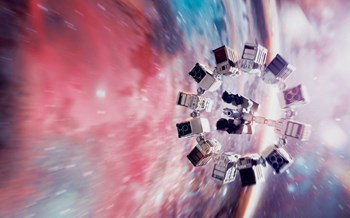 The spaceship that carries passengers on a quest for inhabitable planets in the 2014 blockbuster ''Interstellar'' is fuelled by compact tokamaks that also provide the vessel's electricity.
In 1985—the very year that a collaborative international project in fusion was proposed by General Secretary Mikhail Gorbatchev to President Ronald Reagan—fusion made a discreet but noteworthy appearance in a film that would be seen by millions around the world: Back to the Future.


In one of the last scenes of the movie, the sports car that had travelled through time thanks to a "flux capacitor" powered by plutonium is equipped with a brand-new apparatus: a coffee-grinder-shaped fusion generator with the label "Mr Fusion."


The successful harnessing of fusion power shows up in other blockbuster productions: cold fusion is at the centre of the intrigue in the spy thriller The Saint (1997); we encounter it in Spider Man II (2004) when another "Doc" (Octavius) wields its supposed devastating power.


Superheroes seem to have a privileged relationship with fusion: take, for example, Iron Man (in a 2008 film of the same name) whose exoskeleton integrates a miniature fusion reactor; or Batman, in Dark Knight Rises (2012), who prevents the villain from transforming an experimental fusion reactor into a thermonuclear bomb.


The action in Oblivion (2013) fast forwards us to the year 2077, where off-shore fusion power stations furnish energy to the colonies established on the largest of Saturn's moons, Titan. For the first time in movies, fusion is treated as the energy source it is, whose main vocation is to produce electricity. 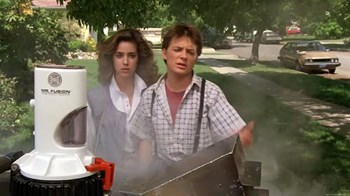 In this scene from the 1985 movie ''Back to the Future'', fusion makes its film debut. Doc's DeLorean travels through time thanks to a a coffee-grinder-shaped fusion generator with the label ''Mr Fusion.''
A main vocation, perhaps, but not an exclusive one: for many years, scientists have been studying the possibility of using fusion for space propulsion. NASA, for example, is developing a conceptual vehicle that it calls Discovery II (in reference to the film 2001: A Space Odyssey) based on a small, spherical tokamak that could produce enough energy to propel a spaceship to Jupiter in one hundred days.


In its conceptual design, the energy produced by fusion reactions would heat and expel a propellant at high speed, providing the thrust to move the spaceship forward at 500 km/sec.


In last year's megahit Interstellar, the main characters travel aboard a fusion-powered spaceship, Endurance, on their quest for habitable planets outside of our solar system. In each of the vessel's modules a compact tokamak is responsible for propulsion and for providing electricity throughout the vessel.


The creation of a colony on Titan or the search for a habitable planet may belong to a far-off (and hypothetical) future, but in science fiction movies, the depiction of fusion energy is getting closer to the reality of tomorrow.