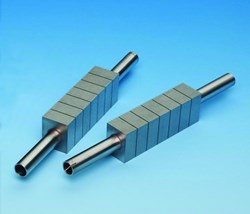 
The European Domestic Agency, responsible for procuring the divertor inner vertical target, has concluded multiple framework contracts for the fabrication of qualification prototypes. Work will be conducted in two phases: the pre-qualification phase, during which small-scale prototypes will be manufactured and tested in order to validate manufacturing technologies, and a second qualification phase (for those companies whose mockups pass the first phase) for the fabrication of full-scale inner vertical target prototypes.


For the European Domestic Agency, contracting with different suppliers not only ensures competition, but also contributes toward mitigating technical risks through the development of different technologies. "We are working to find the right compromise," says Patrick Lorenzetto, project manager for Europe's in-vessel team. "We need enough companies for the pre-qualification stage in order to have enough competition when we then get to the qualification stage."


With the framework contract signatures now in place, the companies will have approximately 18 months for the manufacturing of the small-scale inner vertical target mockups.


Read the full story on the European Domestic Agency website.