188 young students get a closer look at ITER 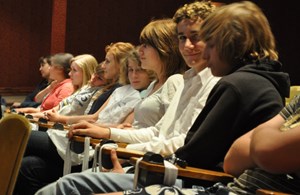 Last Friday 30 April, 188 students from collège Albert-Camus in La Tour d'Aigues, near Pertuis, were given the opportunity to get a closer look at ITER.
In classe de Troisième, which French students attend when they are 15, one learns about atoms, nuclei and plasmas. Fusion and ITER, however, are not part of the curriculum. "We had heard that scientists from all over the world had gathered at Cadarache to find a new way of producing energy," says Roxane. "But we didn't know they already knew how to do it ..."


Last Friday 30 April, Roxane was one of 188 students from collège Albert-Camus in La Tour d'Aigues, near Pertuis, who were given the opportunity to get a closer look at ITER.


Split into four groups, the students were welcomed at the Visitors Centre and given presentations on fusion, ITER and biodiversity by ITER scientists Hans Decamps, Philippe Chappuis and Joël Hourtoule. 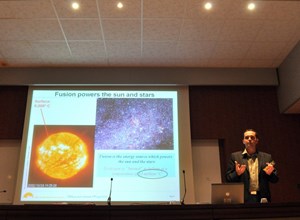 Joël Hourtoule was among the ITER scientists who gave presentations to the young students from La Tour d'Aigues.
The biodiversity theme came as a surprise for many of the students. "We knew that a large area of forest had been levelled and that many trees had been cut down to make room for ITER," said Megane and Manon. "So we didn't think biodiversity was a big preoccupation. Well, we were wrong. It definitely is!"


Most students were not aware that ITER was "a research program." Some, like Charlie, thought it was "nul"—a typical teenage expression meaning that no good could come out of it. Well, after a day spent at ITER, even Charlie acknowledged that he would consider changing his mind.