ITER conductors on their way to completion 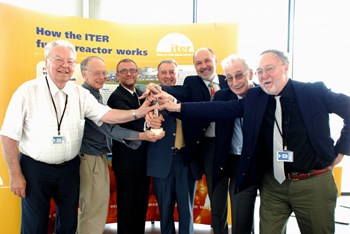 On 16 September, Robert Aymar, former director of both CERN and the ITER Project; Neil Mitchell, head of the ITER Magnet Division; Arnaud Devred, leader of the ITER Superconductor Systems & Auxiliaries Section; Lucio Rossi, project leader for the LHC High Luminosity Upgrade; Pierluigi Bruzzone, head of the Swiss Plasma Center's Superconductivity Section; Bruce Strauss, program manager at the Office of High Energy Physics (US Department of Energy); and David Larbalestier, Florida State University, celebrate the success of the eight-year campaign to procure ITER conductors.
One last time the band got together again. Like old friends they didn't need words to salute each other—a slap on the shoulder at the coffee table, a respectful nod when entering the door was sufficient. They had come a long way but the job is nearly done and it was time to say goodbye.


Last week, from 15 to 17 September, representatives from the applied superconductivity community, members of the ITER Organization and Domestic Agency magnet teams, and suppliers—the "band" as Superconductor Section Leader Arnaud Devred calls them—convened for one last time to celebrate the wind-down phase of an eight-year campaign to procure ITER's superconductors.


Since 2008 the group has met twice yearly to facilitate the exchange of information, share experience, and identify synergies; now, with the manufacturing of the ITER superconductors drawing to a close, it was time to look back and celebrate.


For a special event held on the second day of the meeting, some of the grands seigneurs of the superconducting world were present in the amphitheatre of ITER Headquarters. One of them was Bruce Strauss, program manager at the Office of High Energy Physics (US Department of Energy) and an eye-witness to the fast development of superconductors and their applications over the last decades.


Applauding the ITER Organization for its conductor procurement strategy, which has been instrumental in establishing processes and systems to standardize conductor production and testing around the world, Strauss said: "You have set the bar for managing a multi-vendor, in-kind acquisition strategy. My warm congratulations on the demonstrated success of this venture."


Valued at more than EUR 600 million, the 11 conductor Procurement Arrangements signed by the ITER Organization between 2007 and 2010—covering the procurement of conductors for the large toroidal field, poloidal field and central solenoid magnets as well as correction coils and feeders—represent one of the project's largest in-kind procurement packages. Six out of the seven ITER Members (China, Europe, Japan, Korea, Russia and the United States) have taken part.


The ITER Organization, in close collaboration with CERN, pioneered reporting, document handling and quality assurance procedures to ensure that strands produced by suppliers all over the world achieved the same required performances. More than 12,000 control points, relying on over 30,000 strand critical measurements, have been cleared in a timely fashion through a web-based database developed by the ITER Central Team, enabling production to run smoothly at approximately 20 suppliers around the world. Today, 70 percent of the manufactured conductor unit lengths have been accepted by the ITER Organization. 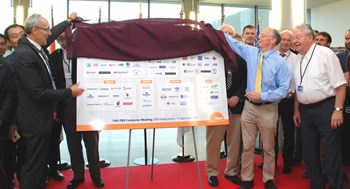 ITER Director-General Bernard Bigot unveils a plaque that lists all of the contributing partners to ITER's longest-lead procurement package.
ITER superconductors are manufactured from one of two types of advanced materials that become superconducting when cooled with supercritical helium in the range of 4 Kelvin (-269 °C)—niobium-tin (Nb3Sn) for ITER's highest magnetic field applications or niobium-titanium (Nb-Ti).


"Project pull is decisive for applications," David Larbalestier, from Florida State University, reminded the audience, "and conductor development follows." For this world-known expert in the field, the fact that ITER conductor procurement is drawing to a successful close heralds the beginning of a superconducting era.


Lucio Rossi, who was in charge of superconductors for CERN's Large Hadron Collider (LHC) and who is now project leader for the High Luminosity Upgrade, agrees: "Superconductivity has been an enabling technology for accelerators. For the LHC, niobium-titanium conductors were chosen due to cost constraints and the immaturity of niobium-tin in those days. But the search for 'better' never ends in science and niobium-tin will be the first choice material for the LHC Upgrade. With these high performance materials there is a 'super world' ahead of us."


"The impossibilities of the years 2005-2008 have become standard industrial technology in 2015," stressed the head of the ITER Magnet Division, Neil Mitchell, during his talk on the "making-of" ITER superconductors.


"It has been a long and winding road," said Arnaud Devred at the close of the fourteenth and last Conductor Meeting. "Our band will soon break up but, today, let's remember that together we have overcome many technical challenges. This has been an amazing human adventure."


Celebration chairman Robert Aymar—former director of both CERN and the ITER Project—concluded in a final email to participants. "The final meeting on ITER conductor procurement has given us all the opportunity to understand the status of production and conductor performances. We are now reassured that the conductors will be available on time to satisfy the needs of the coil manufacturers and that the conductors have margins in their performance to allow the magnets to satisfy their requirements. These are two very important results—bravo!!"
A press release on the success of ITER conductor procurement is available in English or French.