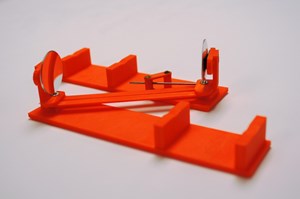 For the prototype of the mechanical device, the PPPL team used a 3D printer and off-the-shelf parts from a supermarket. A full-metal prototype is planned.
At the Princeton Plasma Physics Laboratory (PPPL) in the US, the spirit of tinkering lives. This past summer a team of engineers invented a mechanical device designed to be installed on ITER using 3D printing and parts bought at the supermarket chain Walmart.


Known as a "self-aligning mirror mechanism," the invention consists of two horizontal bars, each with a mounted mirror, connected in such a way that no matter how the bars move the mirrors always stay in the same alignment with one another. Each bar is about a foot long and is made of orange resin, but the full-size version—what exists now is only a prototype—will have arms twice as long and made of metal.


ITER will use the device to keep microwave beams that measure plasma qualities from being jolted off track when the temperature in ITER reaches 100 million °C, causing the metal structure containing the plasma to expand up to an inch. "We needed something to keep the beam in alignment," said PPPL engineer Michael Gomez, whom ITER tapped to design the device.


Gomez teamed with PPPL engineer Ali Zolfaghari and Cara Bagley, a mechanical engineering student at Lehigh University (Pennsylvania, US). Bagley was at the Lab for the summer and performed functional analysis to make sure that the system that was developed would operate as designed.


Gomez and Zolfaghari were initially contacted by Ben Tobias, a PPPL staff research physicist who is involved with ITER design. "We needed a way to automatically and precisely align a quasi-optical transmission line in a region of ITER with limited or no manned access," Tobias said. "One set of transmission lines is mounted on a large moving cart about the size of a mini-van, and those lines have to line up within about a millimeter of tolerance with a set of quartz windows leading to the plasma chamber."


Tobias suggested a device without a motor that could adjust its orientation by itself. Electric motors could be damaged by either radiation or electromagnetic fields, and getting access for repairs would be difficult. Pneumatic motors, which are powered by compressed air, were ruled out because they would require specialized circuitry and increase the design's overall complexity.


"My task was to find a simple solution that relied on mechanical principles," Gomez said. The resulting concept ensures that the diagnostic microwave beam will stay aligned if the ITER machinery expands or is jolted.


Once they had finalized the design, PPPL engineer Bob Ellis used a 3D printer to create a prototype that would demonstrate the device. The printing technology allowed them to have a finished prototype in days.


After the printed device had been completed, Gomez still had to find two mirrors. He found what he was looking for at Walmart—two concave mirrors that attached to the rear-view mirrors on a car to increase the driver's field of vision. When he dismantled the mirrors from their mounts, he found that the reverse side was also mirrored. And because this mirror was on the reverse, it had the concave shape he needed. "By luck I was able to find mirrors that were concave and the right size," said Gomez.


Once the design had been more or less completed, Bagley used a computer program called "ANSYS Rigid Body Dynamics" to analyze how the device would actually move. "Bagley showed that the mechanism could adapt to any direction of thermal growth and movement of the vessel, including the radial, horizontal, and toroidal directions," said Zolfaghari. "In other words, she made sure that the mechanism would not jam or get overextended when used in different orientations."


Gomez and Ali showed the prototype at PPPL's summer intern poster session in August along with Bagley. She found working on the system valuable, saying that "being given the chance to help bring a novel design from an idea to an invention disclosure was really rewarding for me."


Princeton University has filed a provisional patent on the device. If private industry is interested in licensing the technology, the university plans to submit an application for a nonprovisional patent. The review process could take as long as several years.


A full-sized metal prototype of the device will be built during the first quarter of 2016 and sent to General Atomics, a private company in San Diego that operates the DIII-D fusion reactor for the Department of Energy. The prototype will be tested under conditions that mimic those the finished device will encounter in ITER. A "paper review" of the device's design will be conducted by ITER staff in October 2017, and the finished version will be delivered to ITER in 2019.
Read the original article at PPPL.