At WEST, it's now time for proposals 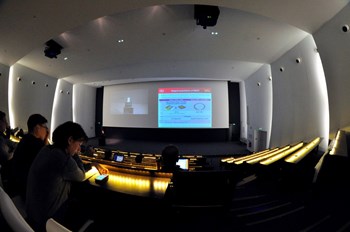 On 1 February, a seminar was organized at ITER Headquarters to present the present status of WEST and launch the call for proposals. The WEST platform is open to the international fusion community.
A few hundred metres from where the ITER Tokamak Complex is rising, a fusion plasma will light up before the end of this year.
It will happen in a machine that has written some of fusion history's most brilliant pages.


Tore Supra, which began operating in 1988, was the first tokamak to be equipped with superconducting coils and to later be fitted with actively-cooled plasma-facing components. In December 2003, the CEA-Euratom installation achieved a record plasma pulse that lasted 6 minutes and 30 seconds.


Over the past three years, the near 30-year-old machine has undergone a significant overhaul. In order to serve as a test bench for ITER, Tore Supra has traded its carbon-carbon fibre (CFC) "limiter" for an ITER-like tungsten divertor.


As the construction of the WEST platform (W Environment in Steady-state Tokamak, where "W" is the chemical symbol of tungsten) approaches completion, the time has come for submitting experimental and modelling proposals for the first phase (2016-2017) of the platform's exploitation.


"We have identified and proposed high-priority research areas such as heat load pattern characterization, wall protection systems, radiofrequency heating or preparatory work for long-pulse operation," explain task force leaders Emmanuelle Tsitrone and Clarisse Bourdelle who organized a seminar at ITER Headquarters on 1 February. "The call, however, is open to innovative ideas for making the best use of WEST's specific features."


The WEST team is planning phased operation. In Phase 1, WEST will operate with a mix of actively cooled ITER-like tungsten divertor elements and inertial tungsten-coated divertor start-up elements. In this phase, full power will be available, but plasma operation will be limited in time by the inertial divertor elements (typically ~10 seconds at high power). In Phase 2, the full actively cooled ITER-like tungsten divertor will be available allowing long-pulse operation, up to 1,000 seconds.

The WEST project and its research plan are open to the international fusion community.

More information on the WEST call for proposals.