A new way of looking at burning plasma physics 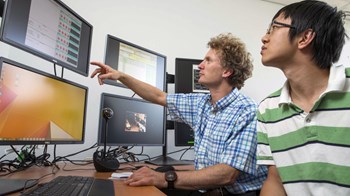 Matthew Hole (left) and Zhisong Qu are in the virtual control room for overseas fusion experiments at the Research School of Physics & Engineering (ANU College of Physical & Mathematical Sciences). Credit: Stuart Hay, ANU.
Scientists developing fusion energy experiments have solved a puzzle of why their million-degree heating beams sometimes fail, and instead destabilize the fusion experiments before energy is generated.


The solution used a new theory based on fluid flow and will help scientists in the quest to create gases with temperatures over a hundred million degrees and harness them to create clean, endless, carbon-free energy with nuclear fusion.


"There was a strange wave mode which bounced the heating beams out of the experiment," said Zhisong Qu, from the Australian National University (ANU), lead author of the research paper published in Physical Review Letters.


"This new way of looking at burning plasma physics allowed us to understand this previously impenetrable problem," said Mr Qu, a theoretical physicist in ANU's Research School of Physics and Engineering.


Hot plasma is extremely turbulent and can behave in surprising ways that baffle scientists, at times becoming unstable and dissipating before any fusion reactions can take place.


Mr Qu developed a simpler theory for plasma behaviour based on fluid flow and was able to explain an unstable wave mode that had been observed in the largest US fusion experiment, DIII-D.


Collaborator Dr Michael Fitzgerald, from the Culham Centre for Fusion Energy in the UK, said the new method made much more sense than previous brute-force theories that had treated plasma as individual atoms.


"When we looked at the plasma as a fluid we got the same answer, but everything made perfect sense," said Dr Fitzgerald.
"We could start using our intuition again in explaining what we saw, which is very powerful."


Leader of the research group, Associate Professor Matthew Hole, from ANU's Research School of Physics and Engineering said the theory's success with the DIII-D wave puzzle was just the beginning.


"It will open the door to understanding a whole lot more about fusion plasmas and contribute to the development of a long-term energy solution for the planet."


Associate Professor Hole said that, for him, the quest for fusion energy went beyond a sustainable planet.


"I'm a bit of a Star Trek fan—the only way you are going to travel to another star system is with a fusion reactor," he said.