The making of a steel girder 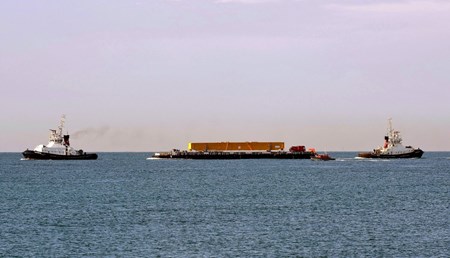 The 47-metre-long girder (seen here crossing the inland sea Etang de Berre on its way to the ITER worksite) is but an element of the giant pair of independent bridge crane that will soon be installed in the Assembly Hall. © Emmanuel Bonici
The overhead crane that gave its name and reputation to the company still stands in one of the factory workshops in Villefranche-sur-Saône, near Lyon, France. Back in the 1950s, the crane's innovative design had won first prize at one of France's largest post-war industrial exhibits.


The crane was patented under the name REEL—for Rational, Economic, Elegant and Light—which was soon adopted for the whole company.


In the course of seven decades REEL has expanded dramatically. It is present on four continents and specializes in bespoke handling equipment for the nuclear, aerospace, aluminium, defence and offshore industries.


In the summer of 2013, the European Domestic Agency for ITER signed a contract with a consortium under REEL's umbrella(1) for the design and manufacturing of the crane and trolley system that will handle and pre-assemble components before they are integrated into the ITER Tokamak.


In terms of both load and precision, the handling tasks will require exceptional lifting capacities. A pair of independent bridge cranes—composed of 47-metre-long girders and heavy-lift trolleys—form the principal overhead lifting system with a capacity to manoeuvre loads of up to 1,500 metric tons and perform millimetre-scale positioning for the pre-assembly operations. 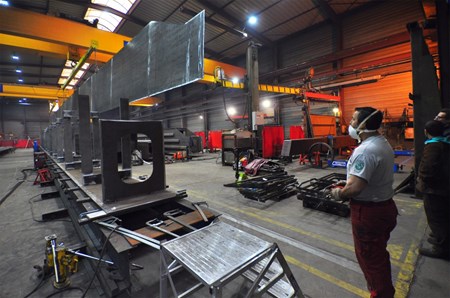 However sturdy and powerful, a girder is a hollow structure—a skeleton made of steel plates welded together and reinforced by frames, ribs, spacers and stiffeners (here, the pre-welding assembly of a 50-tonne crane at REEL's workshop in Villefranche-sur-Saône, France).
Although REEL has designed and manufactured cranes of all sizes and purpose, the order for a double 750-tonne lifting system was a first. "Until now, a standard order was in the 160- to 180-tonne range," explains Benoit Nakul, who oversees ITER fabrication for REEL. "But whatever the lifting capacity the architecture is basically the same. It's a matter of calculating how to spread the load."


The first challenge when designing a crane capable of lifting such heavy loads is to keep the deadweight of the crane itself as low as possible. "This is paramount to reduce the forces that are exerted on the building structure in normal operating conditions and to mitigate the consequences in case of a seismic event," explains Nakul.


In Villefranche-sur-Saône REEL handled the manufacturing of the four 375-tonne trolleys. But due to limited lifting capacity at that site, the fabrication of the four girders was subcontracted to the Spanish industrial group Asturfeito, already involved in several fusion contracts.


However sturdy and powerful, a girder is a hollow structure—a skeleton made of steel plates welded together and reinforced by frames, ribs, spacers and stiffeners, whose size and position are determined by sophisticated load calculations.


Once a precise mapping of the loads has been achieved and a 3D model finalized, girder fabrication can begin which is a challenge in itself. "We're dealing with structures that are almost 50 metres long, with tolerances in the millimetre range. Welding is a particularly delicate operation as the heat/energy loads involved can cause irreversible deformations, and we need to butt-weld 12-metre-long, 60-millimetre-thick steel plates and still achieve perfect planarity..." 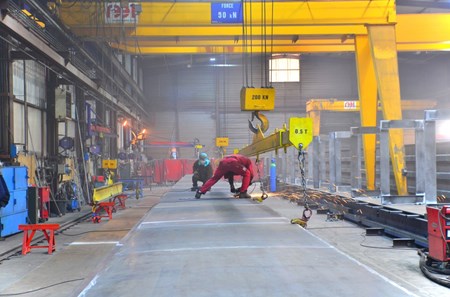 In addition to the main system that will lift loads of up to 1,500 tonnes, REEL will also deliver an auxiliary 50-tonne overhead crane, which is currently in the fabrication stage.
The girders that come out of the factory have a slight, deliberate curvature. This "counter-boom" is precisely calculated to allow the girders, once in place, to straighten under their own weight. The design still allows for some flexibility as each crane will lift a wide range of loads, from a few dozen to many hundreds of tons.


The quest for the best ratio between deadweight and strength has resulted in a mass of approximately 600 tonnes per overhead crane (including the girders, their auxiliaries and the trolleys). "This means that we have a crane system weighing 1,200 tonnes that is scaled to lift up to 1,500 tonnes—25 percent more than its own weight. And this huge mass needs to be manoeuvred and positioned with millimetre precision..."


The 1,500-tonne overhead crane system, spanning the whole width of the Assembly Hall, is due to be installed in June. At a later stage—when the Tokamak Building is complete—the Assembly Hall rails will be extended 80 metres to allow travelling from one building to the other in order to deliver the pre-assembled components to the Tokamak assembly pit.
(1) The NKMNOELL-REEL consortium is formed by NKMNoell Special Cranes GmbH, Germany and REEL S.A.S., France