Preparing for a Wow! moment

Share Tweet
Preparing for a Wow! moment
In a few weeks, a spectacular operation will unfold in the Assembly Hall: the four girders and corresponding trolleys that form the double overhead crane will be lifted into position, some 43 metres above the basemat. 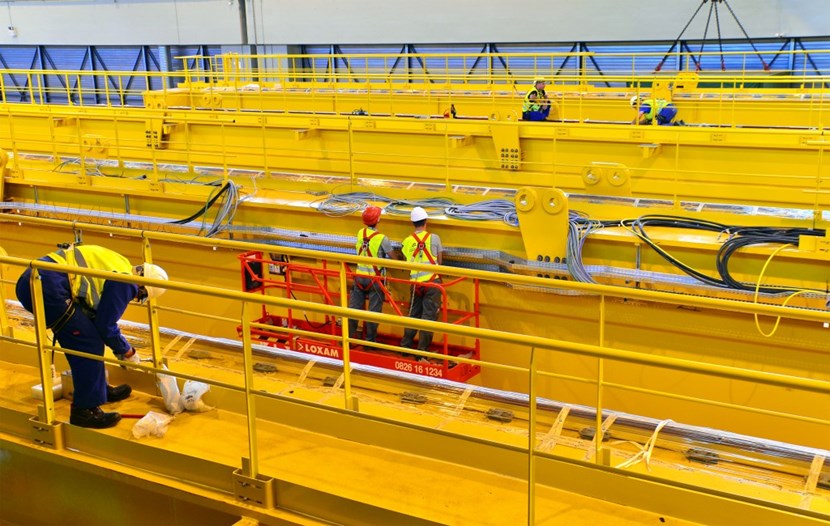 In the Poloidal Field Coils Winding Facility workers are busy installing the accessories and electrical equipement of the four 155-tonne girders that will form the Assembly Hall's double overhead travelling crane.
Most of the elements that will form this exceptionally powerful lifting tool have been delivered to ITER─the four girders, each weighing 155 tonnes, arrived in March and April, and the four trolley structures in mid-May. As for the drums, they will be in this week.


In order to prepare for the installation, similar operations are underway at both ends of the ITER site.


At the north end of the Poloidal Field Coils Winding Facility where the girders have been stored since their delivery, workers are busy installing bogies (also called "trucks"), gear-motors, braces and the electrical equipment that will power both cranes and trolleys.


In the storage area at the entrance of the site, work began today to install equipment on two of the four trolleys—this work will gain momentum when the drums are delivered in mid-week.


Once all the equipment and accessories are installed, girders and trolleys will be moved to the Assembly Hall. A powerful crawler crane, operating from outside the building, will pass its hook through an opening in the roof and lift the components according to a carefully planned sequence of events.


Considering the height of the Assembly Hall structure, the weight and size of the components to install, and the required precision, the operation promises to be one of the Wow! moments of ITER construction.