Share Tweet
High-level Iranian delegation visits ITER worksite
There are presently twelve vice presidents in the Republic of Iran and on Friday, 1 July, two of them were at ITER.
Ali Akbar Salehi, Vice President and head of the Atomic Energy Organization of Iran, and Sorena Sattari, Vice President for Science and Technology, led a delegation of a dozen nuclear specialists and government officials who spent the better part of the day visiting the ITER worksite and installations. 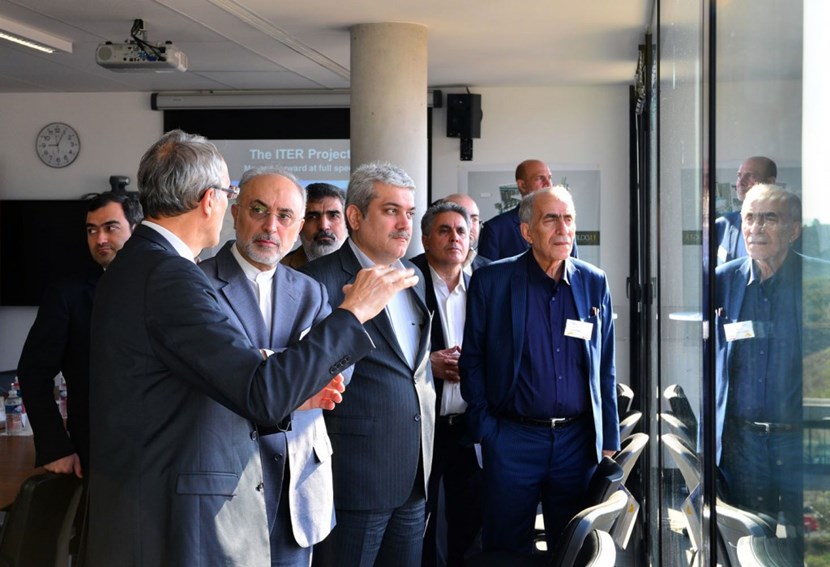 First row, from left to right: Bernard Bigot, Director-General of the ITER Organization; Ali Akbar Salehi, Vice President and head of the Atomic Energy Organization of Iran; Sorena Sattari, Vice President for Science and Technology; and Mahmood Ghoranneviss, head of the Plasma Physics Research Center at Azad University. The Iranian ambassador to Paris, Ali Ahani, was also part of the high-level delegation.
Iran has for a few years publicly expressed its interest in fusion and the ITER Project. Specifically, the "Iran nuclear deal"─ signed last year between Iran and the five permanent members of the United Nations Security Council plus Germany─included a pledge of support from the parties regarding Iran's interest in cooperating with ITER.


In August 2015, a few weeks after signing the agreement, Vice President Salehi was quoted saying: "This is my second time heading the Atomic Energy Organization (1). In my previous appointment, I made fusion our essential goal. It was given our highest priority because fusion is the future source of energy."


Iran has a longstanding fusion energy research program, which includes various approaches to fusion and the investigation of many applications of plasma technology.


In a September 2015 interview, Mahmood Ghoranneviss, who heads the Plasma Physics Research Center at Azad University and was part of the high-level delegation to ITER, gave some details on his country's fusion research program. "We have about 100 scientists who are working on fusion research in Iran," he said, "and there are over 150 PhD students working on plasma and fusion topics. Approximately 150 papers have been published by our graduate students in fusion."


On Friday—as the Iranian officials met with ITER management; toured the site; visited the Assembly Hall, the Poloidal Field Coils Winding Facility and the Cryostat Workshop; and entered the virtual reality room—they connected for the first time with the reality of the project.


And they were both impressed and enthusiastic.


"The ITER Agreement is open to any nation that wishes to contribute to the project," said ITER Director-General Bernard Bigot as he explained the history and governance of the international collaboration. "All decisions regarding membership and collaboration are subject to the unanimous consent of the ITER Council, the governing body of the ITER Organization."


The visit, however, was in no way the start of an official discussion or process. Rather, it was a meaningful way for the Iranian officials and scientists to more fully understand the nature and scope of the project as well as the status of progress in manufacturing and construction.


(1) Ali Akbar Salehi's first mandate as head of Iran's Atomic Energy Organization (AEOI) ran from July 2009 to January 2011, at which date he was appointed Foreign Minister. He was back at the helm of the AEOI in August 2013.